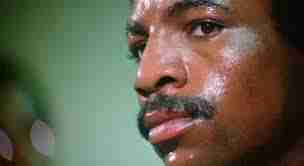 Creed. Is it going to happen? “Definitely,” says Sylvester Stallone.

In an exclusive interview with UK’s Graham Walker ahead of his upcoming live appearance in Sheffield, England, Sly opened up with some details about the forthcoming “Creed” film, set to begin shooting early next year.

“It’s something that I thought at first was insane,” he says. “My vision of Rocky was complete. I was very satisfied with the last one and certainly Rocky could never get in the ring again.”

“Then this idea was presented to me where Creed has a son. When they meet up it becomes kind of  like a resuscitation for Rocky, who has just sort of given up and waiting for the eventual day when he passes, and he’s at peace with that. Then this new force comes in – so what I’m trying to say in too many words is that it’s about this kid – he is the center of this movie – it’s about Creed, it’s not Rocky music, its not ‘Gonna Fly Now’, it’s about this whole new creation. And that I thought , wow, this just might work. It’s not Rocky 7. It’s Creed 1. It’s really about the rhythms of this young man, this [actor] Michael B. Jordan who’s playing it.”

Of all his characters, Rocky is clearly Stallone’s favorite because, he says, Rocky “speaks to the common man … Rocky is me after coffee in the morning and Rambo is me before coffee.”

Click here for the rest of the interview PLUS the audio >

In the years since Rocky Balboa back in 2006, Sylvester Stallone has repeatedly stated that the story line for his signature character was complete and had come full circle with the last film, the fifth sequel in the Rocky movie series which at the time of Balboa, had spanned 30 years.