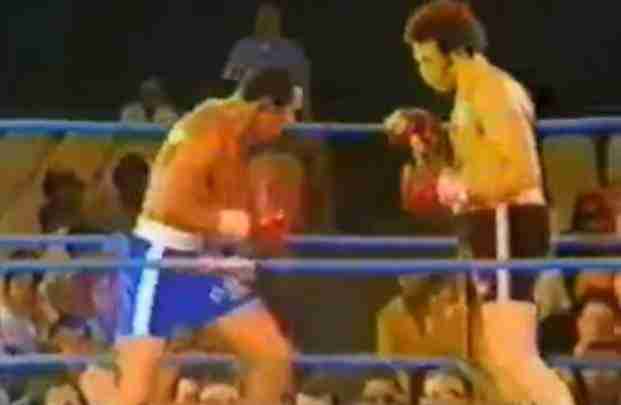 Did you know that Rocky’s first on screen opponent was a professional boxer in real life?

6′ foot 3″, 208 pound Argentinian “KO King” Pedro Lovell was cast as brawler Spider Rico and fought with Sylvester Stallone in the opening scene of the original Rocky at Resurrection Gym.

A real-life boxer with a respectable record (23 fights, 18 Wins, 14 Wins by KO, 3 Losses), Lovell was on the rise in the boxing world in the 1970’s when he won the small part of Spider Rico.

Additionally, Sylvester Stallone was initially interested in nabbing legendary fighter Ken Norton (the guy who broke Muhammad Ali’s jaw and KO’d Joe Frazier) for the role of Apollo Creed, but the part went to actor Carl Weathers after Norton was forced to bow out to compete in the ABC TV sports competition show The Superstars.

On January 10, 1976 – literally one day after filming on the original Rocky began – Ken Norton stepped into the ring for a televised fight with Pedro Lovell in Las Vegas.

Per BoxRec, the Associated Press reported: “Referee Ferd Hernandez stopped the nationally televised fight at 1:40 of the fifth round after a smashing right to the head buckled Lovell’s legs and caused him to turn his back on Norton. Lovell held his own in the first three rounds, scoring well with a left jab and sending home an occasional hard right. Then Norton, pushing his career record to 35-3, almost took Lovell out in the fourth round. He staggered his opponent with a left uppercut to the chin in a neutral corner, and then pushed Lovell to the center of the ring, continuing to land shots to the head. As the bell sounded to end the round, Lovell walked slowly back to his corner. In the fifth round, Lovell’s speed seemed gone as Norton quickly resumed his relentless attack.”

Though he lost to Norton in the 5th, Lovell went on to fight in four more pro boxing matches through 1977 before announcing his professional retirement.

Thirty years after being knocked out by Balboa after that nasty headbutt, Pedro Lovell returned to the Rocky series in 2006’s Rocky Balboa where he enjoyed a slightly beefier role as that old guy washing dishes in the kitchen at Adrian’s Restaurant. Spider then joined Rocky’s corner team for his fight against Mason “The Line” Dixon, and read a verse from the Bible to Rocky before the match at Mandalay Bay.