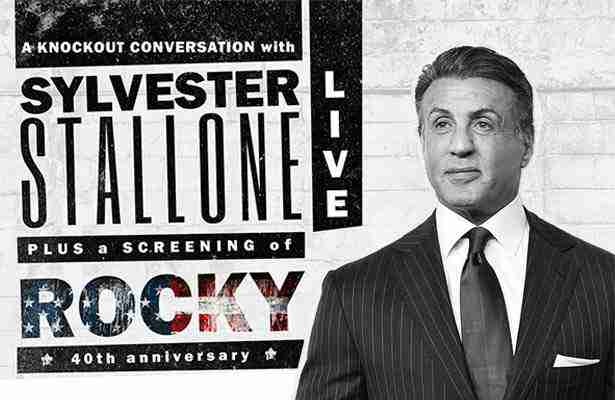 Update: June 20, 2016. Unfortunately, this special event has been cancelled due to a scheduling conflict on Sly’s agenda. There are no plans to reschedule at this time. For those of you who have already purchased, tickets are being refunded by the theatre.

A KNOCKOUT CONVERSATION WITH SYLVESTER STALLONE

American “Rocky” fans finally get their chance to see Rocky Balboa in person this summer when Sylvester Stallone attends a special 40th Anniversary screening of Rocky in Costa Mesa, California.

In the past couple of years, Sly has appeared in the UK at special in-person events in England where he participated in exclusive Q&A sessions and VIP meet and greets with ticket holders. Now the star has finally set up such an event here in the states, scheduled for Sunday, August 7, 2016 at Costa Mesa’s Segerstrom Center for the Arts.

Earlier this year, Talia Shire hosted a 40th anniversary screening of “Rocky” at the Turner Classic Movies Film Festival in Hollywood (see video of her interview here), and Burt Young is scheduled to do the same later this month in New York (more details on Burt’s appearance here.)

Following the August screening, Sly himself will take to the stage to share behind the scenes stories about the making of the original Rocky. Additionally, fans in the audience will get a chance to ask Stallone questions during a Q&A session.

VIP tickets are currently completely sold out, and include a meet-and-greet photo opportunity with Sly and preferred seating. Regular seats start at $59.00.

BUY TICKETS FOR THIS EVENT