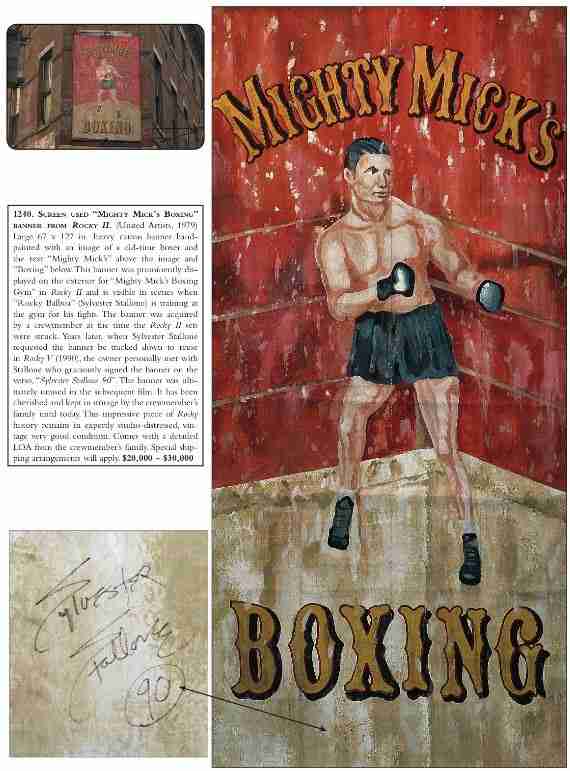 This has got to be one of the coolest pieces of original Rocky memorabilia we’ve ever seen at auction – the screen-used prop sign that hung outside Mickey’s Gym from the set of Rocky II. (Get your own version of Mighty Mick’s Boxing sign here! Posters are priced at $34.99)

This large 67″ x 127″ heavy canvas banner is hand painted with a full length portrait of an old-time boxer, though it appears that the artist didn’t attempt to make him look much like a young Burgess Meredith! The sign was hung on the exterior of the building used as Mighty Mick’s Gym in Philadelphia and appears on-screen in Rocky II.

Since then, it was cherished and kept in storage by the crewmember’s family until it was placed at auction with Profiles in History. This impressive piece of Rocky history remains in expertly studio-distressed, vintage, very good condition. Profiles in History estimates the value of this piece at $20,000 – $30,000. During its first appearance at auction on October 17, 2014, the piece did not sell.

Profiles in History also offered a pair of screen-used boxing gloves which Stallone wore to battle Mr. T in Rocky III – this autographed pair sold in October, 2014 for $20,000.

READ ABOUT THE HISTORY OF THE MICKEY’S GYM SIGN >

News on the Cast of the Movie "Creed" →