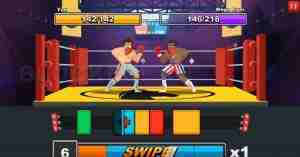 In celebration of Rocky’s 40th anniversary this year, Tapinator has released Rocky™, a free mobile game created in conjunction with MGM Interactive.

Play as Rocky Balboa, and step up against opponents like Apollo Creed, Clubber Lang and Ivan Drago as you train your way up the boxing ranks. Land combinations, counter-punch, dodge, and weave as this arcade style boxing RPG and card-collection game enables you to relive some of Rocky’s most memorable moments.

The game’s old school comic-book style graphics are a departure from the realism of Real Boxing 2’s Rocky game for mobile, but are nonetheless just as fun to play. Packed with cool scenes and official Rocky music, the game leads you through tutorials to help build your skills as you encounter your first opponent and build your muscles.

Tapinator’s officially licensed game allows you to challenge real players worldwide as you fight your way to the top, unlocking 37 different boxers. Eat lightning and crap thunder as Mickey Goldmill trains you in the gym between fights, punching your way to awesome rewards including fighter packs, victory packs and more.