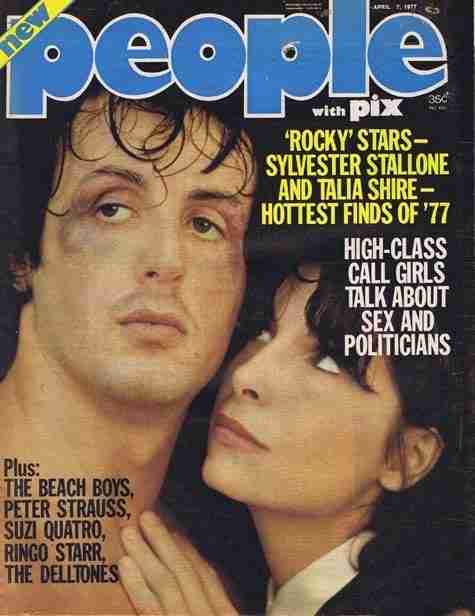 They’d been waiting since eight in the morning, and now it was noon, and still there was no sign of Sylvester Stallone. The fans stood behind the police barricades around Sacred Heart Church, where a scene from Norman Jewison’s F.I.S.T, was going to be shot later that day.

“I’ve never seen anything quite like it.” Jewison said, looking at the crowds, mostly young girls. They stood with their Polaroids in the bright sunlight and squinted wistfully into every car allowed into the church parking lot. Maybe the next one would contain Rocky . . .

“Every time you shoot a movie, you get a certain number of fans,” Jewison said. “Without fans, you wouldn’t have movies. But this is a little unusual. I’ve never seen people so obsessed by a movie star before.”

Jewison has worked with a fair number of movie during his career. With Doris Day and Sidney Poitier and Rod Steiger and James Caan and Faye Dunaway. Twice with Steve McQueen.

“At the beginning, when we first arrived in Dubuque, it was a little wild,” he said. “We’d get a thousand, two thousand people at night, waiting all night for a glimpse of Stallone, and they couldn’t see a damned thing. They’d be standing there for hours, and we’d be shooting down at the other end of the street, or maybe even inside, and they were waiting for him to come out There’s more excitement about him than almost anybody I’ve ever worked with.”

Most cult figures have a chance to get used to their strange and sometimes frightening new status. But Stallone, who crowds seem to relate to in the ways they related to a Brando or a Presley, a James Dean or a Marilyn Monroe, had it happen to him almost without expecting it.

Stallone is aware of his new status

When he made Rocky on location in Philadelphia, no one had heard of him and there were few crowds, drawn mostly by curiosity about the cameras and technical equipment. When he toured the nation last December to promote Rocky, he was in controlled situations – TV studios, hotel suites, limousines, shepherded by public relations people. Besides, although the word-of-mouth on Rocky was already building, few people had seen it. Stallone could still walk down the street.

But then he came to Dubuque to make F.I.S.T., the story of a 1930s union organizer who fights his way to the top of the U.S. labor movement, and suddenly he was made very aware of his new status. After several assaults by enthusiastic fans, he had to have his hotel room posted with 24-hour-a-day armed guards. His arrivals and departures became state secrets and security problems.

On his first day in town he rose early and, probably somewhat naively, went out jogging. He was spotted by fans who were even earlier risers, and mobbed. One day early in the film’s shooting schedule, he went into the Riverboat Lounge of Dubuque’s Hotel Julien, where the cast and crew are staying. On every night since, the Riverboat has been crowded with girls hoping he’ll stop in for a second beer (and by young men hoping that if Stallone doesn’t show, the girls might give them a chance).

Stallone has even become a topic of controversy in the letters-to-the-editor column of the Dubuque Herald-Telegraph, where readers debate such questions as whether he’s really stuck up, why he doesn’t give everyone autographs, why he stays in his hotel room when hundreds of Dubuque citizens would be only too happy to welcome him to the city.

One girl wrote in defending Stallone: “I don’t mean to brag, but it so happens that I sat just two tables from him in a restaurant, and when he got up to leave, he smiled right at me.”

“I think part of it, director Norman Jewison said, “is that people really identify very directly with him. Hell, that was the way I felt when I saw Rocky for the first time. This was about three weeks before it was being previewed, and I saw it at the studio and immediately wanted to cast Stallone for F.I.S.T.

“I ran into some studio people who wanted to know how I liked the picture. I said it was going to be a monster hit. Thirty, forty million dollars. They thought it would be a nice little picture, maybe $10 million. (Last week, Rocky passed $100 million at the box office).

“I think maybe it’s that. Rocky seems so approachable,” Jewison said. “The love scene, where he kisses the girl the first time, reaches a lot of girls’ fantasies. With stars who are bigger, longer established, people like McQueen or Newman . . . there’s a certain reserve. People are a little reluctant to approach them. But not Stallone, who they see as Rocky. He’s a part of them.”