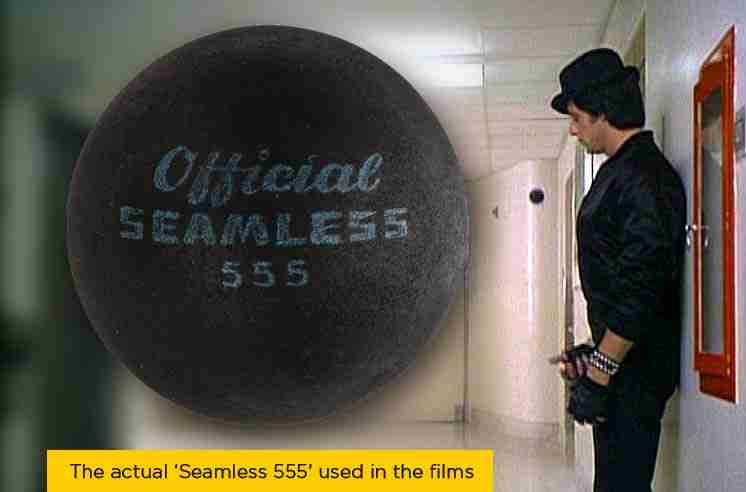 Thanks to Sylvester Stallone’s decision to auction over 1,000 pieces of his movie career memorabilia in December, 2015, we are able to learn a little bit more about the finer details of his most iconic film character – even down to the specifics about the little black rubber ball that Rocky Balboa bounced around in the original Rocky and Rocky II.

“This ball was very symbolic in Rocky’s life,” Stallone explains of the handball, today a vintage collector’s item.

“It’s the only thing that he really had that would take his mind off of his problems. He’d be bouncin’ the ball, almost in a meditative state, so it became part of his persona. And they don’t even make these kind of balls anymore – they’re impossible to find today, so it’s a piece of history now.”

Balboa is first seen with the ball during the very first scene of the original Rocky when Stallone’s name and the title ROCKY appear on screen following his fight with Spider Rico.

Stallone plays with the handball constantly during nearly every scene in which he’s strolling the streets of Philadelphia. Memorably, the ball appears in the scene in which Mr. Gazzo takes him aside aside on a deserted Philadelphia sidestreet to reprimand him for not breaking a guy’s thumbs. As Gazzo drives off, Rocky pulls out the rubber ball from his jacket pocket and bounces it on the pavement as he walks away from the camera. Rocky also toys with the ball in the pet shop when he stops in to ask Adrian for a date to a basketball game.

Fast forward to Rocky II and the ball is still a part of Rocky’s character; he is shown playing with it in the hospital corridor while waiting for Adrian’s report from her obstetrician.

USING THE BALL FOR TRAINING

An interesting deleted scene from 2006’s Rocky Balboa brings even more insight into the handball’s meaning when an older Rocky explains to Little Marie’s son Steps about the value of training yourself to develop endurance and fight through pain or discomfort.

“I think workin’ hard makes your head strong. You know like, when I was a kid, I’d stare up at these street lights for like 30 minutes and try not to blink. Or I’d be squeezin’ a ball until I thought my hand was gonna explode. I was teachin’ myself to be uncomfortable – cause I knew bein’ uncomfortable might come in handy someday like when I was in the ring and such.”

HISTORY OF THE ACTUAL HANDBALL

The real handball used in the film was made by a Connecticut rubber maker which is long out of business – and as Stallone himself said, handballs like this are no longer available on today’s market.

These high quality rubber balls going as far back as the 19th century; Rocky’s particular style was the first official ball of the AHU (Amateur Handball Union) which later became the USHA (United States Handball Association).

GET YOUR OWN ROCKY BALL

Visit the shop to grab your own vintage Rocky ball! While not always in stock due to demand and scarcity, we occasionally do find these vintage handballs, identical to Rocky’s that you can own.