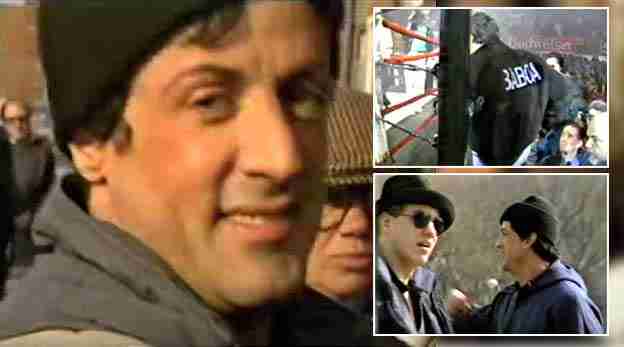 In 1990, television network CBS produced this short documentary about the filming of Rocky V on the streets of Philadelphia, PA.

Unfortunately, this is only one part of a three part series that aired, but it is nonetheless really interesting. (Read more about the making of Rocky V here.)

The cast and crew were in town for two months filming the movie in many of the same memorable locations as the original 1976 Rocky, which shot there hurriedly in only a matter of days.

Times sure have changed.

Behind the scenes video shows director John Avildsen, who returned to the Rocky series for the first time since the original, setting up camera shots at “The Rocky Steps” in front of the Philadelphia Museum of Art as Stallone and Tommy Morrison wait for direction, dressed in their workout clothes.

Huge audience scenes of Tommy Gunn’s boxing match with Union Cane at the Civic Center are shown, with most of the excited fans there to see Rocky despite the fact that he wasn’t even fighting.

“Your energy is overwhelming,” Sly says to the enormous crowd over the ring microphone. Other sequences shown are Rocky and Tommy Gunn’s jog through the Italian Market, where the film’s cameras can be seen tracking the two actors as they run between the fruit and vegetable stands.

The Philadelphia Museum of Art
In the Director's Chair: Sylvester Stallone Interview
Sly Stallone Shares Rare Behind the Scenes "Rocky" Photos
Petition to Save the "Rocky Steps" in Philadelphia
(Video) Interview with Michael B. Jordan on "Creed" Movie →