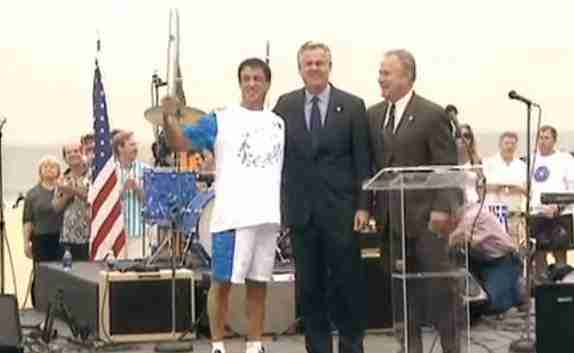 “The Proudest Moment of My Life.”

It’s the perfect #TBT for this Thursday during the Games of the XXXI Olympiad. That time when Rocky Balboa kicked off the summer Olympics over in Santa Monica, California back in 2004.

Sylvester Stallone was chosen as the torch bearer for the Olympic torch relay in Los Angeles during the Athens Games 12 years ago. Sly was all smiles as he ran across Venice Beach with the symbol of the games on June 16, 2004, wearing that year’s official tshirt and white shorts.

Stallone described the honor of being chosen as the “proudest moment of my life,” and before hitting the sands said: “I just hope I can live up to what this flame represents, which is honor, dignity and a never-say-die spirit.”

As he ran across that California beach, we were all reminded of Rocky’s run through the streets of Philadelphia. Nice choice, Olympics.

That year, the Olympic Flame made it to 34 cities in 27 countries on its journey to Athens, Greece.