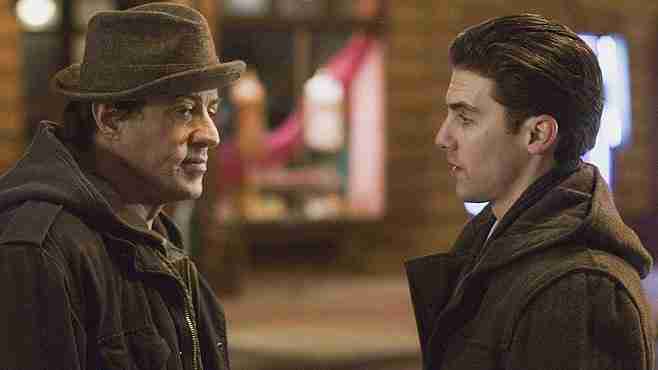 Rocky is known for his slurred speech, a mix of Sylvester Stallone’s acting and real life facial paralysis. Playing his son in “Rocky Balboa,” Milo Ventimiglia joined the club in a cold Philadelphia winter.

“I remember that both of us, we have a little problem with our mouths, crooked mouths,” he said. “I remember him telling me, ‘Make sure your mouth is warmed up because it’s cold out.’ You could see the two of us when we were filming in Philly, standing in front of heat lamps just moving our mouths. Otherwise, it freezes up which was kind of nice. We got to bond on that. We both have the crooked mouth and if it’s below 32 we’re f***ed and our face freezes up. To see he and I before a take, we’re outside in Philly where it’s 20 degrees just, ‘Oowwwww, ahhh.'”

Robert Balboa Junior was previously played by Stallone’s real life son, Sage, but Ventimiglia gave props to the toddlers who played earlier versions. “If you’re gonna talk about Sage, you’ve gotta talk about two other actors that played Robert Junior. I think, if you look at the other films where Robert Junior is around, the conflict, the struggle that he had to deal with, I think there were only positive things for me to learn and to grow from and to build on top of what those previous actors had created.”

Having grown up on the “Rocky” movies and actually getting to act in one, Ventimiglia couldn’t resist the temptation to climb those steps at the Philadelphia museum. “Well, I didn’t run, I walked. It was my last day of filming and it was right before it was about to get on a plane. As I’m walking up the steps of the museum, I see tens, twenties, a hundred people running up and down the steps jumping up and down with their arms [up] and I’m like ‘Oh, my god, you’re kidding. Seriously?’ I watched it and, as I got closer, I realized it was our film crew with all the locals of Philadelphia. Anybody that day could some out and run up the steps and they put all of these people at the end of the movie which is great. It was such a generous thing to give back to Philadelphia.”