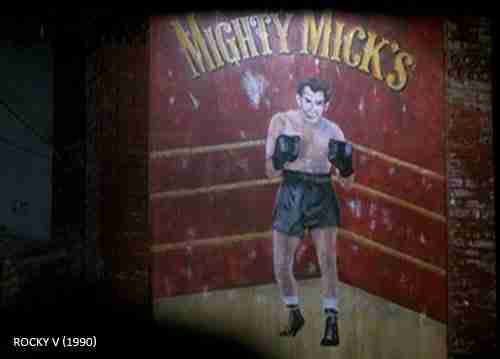 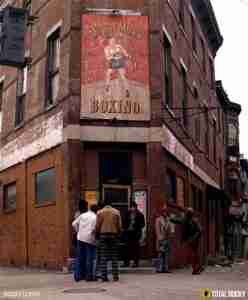 The old Front Street building itself hasn’t changed much since we first saw it in 1976, but Mighty Mick’s Boxing sign certainly has.

Instantly recognizable to Rocky fans, the grungy “Mighty Mick’s Boxing” sign featuring a likeness of Burgess Meredith’s character of Mickey Goldmill is perhaps one of the most memorable images from the Rocky movies. Indeed, the real-life filming location of Mighty Mick’s gym in Philadelphia ranks among the most popular sights for Pennsylvania’s touring Rocky fans.

Distressed and artificially aged by the movie studio, the poster was temporarily affixed to the brick front of 2147 N. Front Street for the on-location filming of both Rocky and Rocky II.

The hand painted sign created by the art department for the original Rocky depicts a 1920’s – 1930’s era boxer ready to fight in the ring, gloves raised, and standing against a bold red background.

The boxer has black hair which is slicked back and wears black boxing trunks. Based on his appearance, it would seem that the artwork for the original sign may not have been intended to represent Mickey Goldmill himself, but merely an average fighter.

First glimpsed in the original movie in 1976, this same banner was brought back to Philadelphia three years later for the location filming of Rocky II on Front Street when both Rocky and Butkus visit Mickey’s gym. 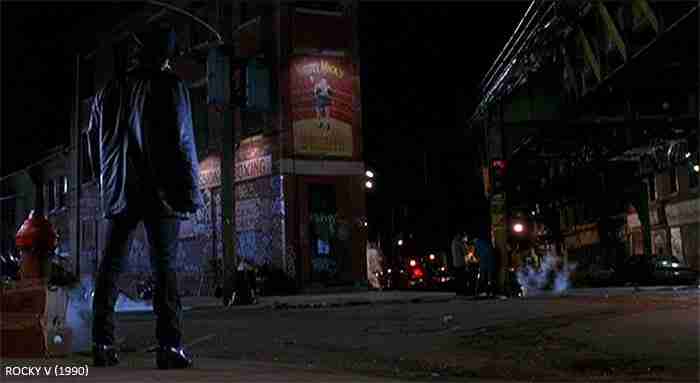 In 1990, Sylvester Stallone contacted a crew member who had worked on the Rocky II production in order to track down the original Mighty Mick’s Gym banner to use again in Rocky V.

The poster was located and when presented with it, Stallone autographed it (“Sylvester Stallone 90”) beneath the word BOXING.

If you watch the movie, however, you’ll notice that the original sign was ultimately not used. In fact, a completely different piece of artwork was created for Rocky V which features the old-time boxer now looking a lot more like Burgess Meredith.

Although the artwork in all versions of the poster is somewhat rugged, the Rocky 5 banner has a much more crude and childish appearance in terms of the artistry, and Mickey Goldmill is in a slightly different stance, facing the viewer. The Burgess Meredith version from Rocky 5 appears to have been a one-time use as it was never seen in the series again.

Sixteen years later, when Rocky and Paulie visit the old sentimental spots around Philly, Mighty Mick’s gym is one of the final stops. “Yo, how you doin’, Mick,” Rocky calls up to the crumbling poster on the building.

For Rocky Balboa, the art department expertly copied the original design seen in Rocky and Rocky 2 – but to give the poster even more age, a corner of the sign was torn away and additional deterioration and darkening was added.

A new era for Mickey’s Gym began with the filming of Creed in 2015.

Scenes shot on Front Street at Mickey’s Gym in Philadelphia in March, 2015 show that an entirely new design for the sign was created by the art department. Gone is the vintage style poster so familiar to fans; it has been updated with a sketch-outlined boxer in the same pose as the original sign situated on a flat yellow background.

The verbiage on the sign and the way it is written remains the same. What’s really cool though, is that the original Mighty Mick’s sign hangs INSIDE Mickey’s Gym in Creed; it can be spotted in the scene pictured above featuring Stallone and Michael B. Jordan.

Get Your Own Version of the Mighty Mick’s Sign!

Inspired by that memorable sign, Total Rocky created its own version of the vintage Mighty Mick’s sign in 2015. Our all-original artwork depicts a young Mickey Goldmill (based on 1930’s photographs of actor Burgess Meredith) standing fight-ready in the boxing ring. Buy Mighty Mick’s Gym poster. 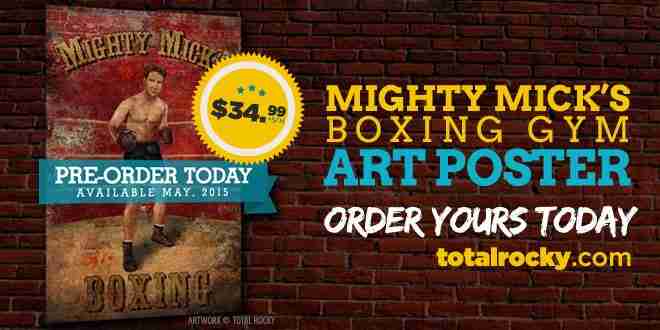