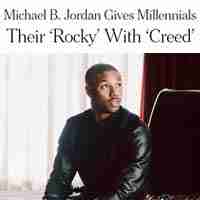 Michael B. Jordan Gives Millennials Their ‘Rocky’ With ‘Creed’

The piece describes the actor’s mother having struggled with the bulk of film roles Jordan has played during his budding career, lamenting that her son has died onscreen in all of them. Creed, Jordan says, will be a nice departure from that storyline for his mom. The 28 year old actor spent nearly a year to physically prepare for his role as the mysterious son of fictional heavyweight champion Apollo Creed, drastically changing his diet, training in the boxing ring and workout out six days a week. The results certainly paid off with his impressive physique in Creed.

During the boxing sequences in Creed, Michael B. Jordan “fought real fighters and had no body double,” the article explains. “That was him taking real punches,” the film’s writer / director Ryan Coogler said of Jordan’s on-screen batterings. “That was all Mike.” Last week, the director participated in a live Twitter interview about the film – click here to read it.

Many fans have expressed concern about the fact that a spinoff movie has the possibility of disrupting the resting place that the Rocky franchise was left with in 2006’s Rocky Balboa, which, admittedly, is a wonderful conclusion to this phenomenal film series. Of this, director Coogler says: “It is true that the Rocky story had come to a nice conclusion as far as Rocky being a driving force. But [Creed] was about another character, with Rocky in a supporting role. That made sense. That was something he could get behind.”