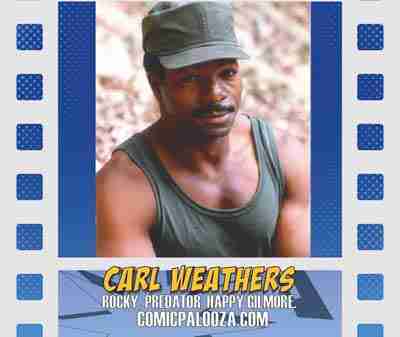 Actor Carl Weathers is scheduled to appear at this year’s Comicpalooza in Houston, TX from June 17 – 19.

2016 marks the 40th anniversary of the release of the original Rocky, and the rest of the film’s cast has spread across the United States to appear at public events in connection with the movie. Talia Shire hosted a Rocky screening earlier this year in Hollywood; Burt Young will host a screening of the movie in New York; and Sylvester Stallone will introduce Rocky in August and participate in a Q&A session with fans.

Carl will be meeting fans, taking fan photos and signing autographs Friday, Saturday, and Sunday in the Celebrity Autograph Arena. On Saturday at 2:00pm, Weathers will participate in a special Q&A session to talk about his work as Apollo Creed in Rocky, and his other popular films like Predator and Happy Gilmore.

Click here for more information and to buy tickets!