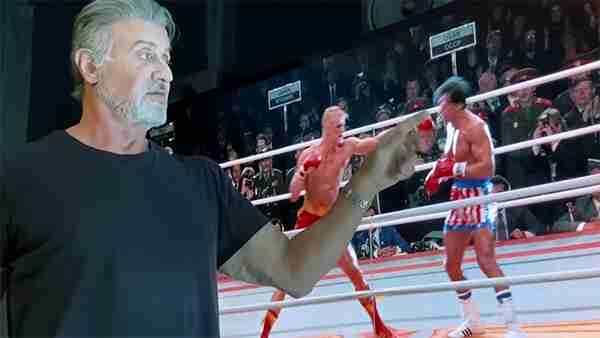 Check out this 90 minute behind the scenes documentary, shot and directed by John Herzfeld, which covers the tedious and creatively challenging process of Sylvester Stallone’s recut of 1985’s Rocky IV.

Follow Sly as he revisits the most popular movie in the Rocky series, trimming and re-cutting the film to suit his more experienced and mature vision.

Now armed with age, wisdom and hindsight, Stallone’s aim was to remove some of the dated or silly moments in the original Rocky IV and recraft them into something more dramatic and contemporary.

“The story’s not in the punches,” Sly explains of the final fight with Ivan Drago. “The story is in the expression. If you’re not feeling what’s going on emotionally with both of these guys during the fight, you might as well just see two rams butting heads.”

What “Rocky” Means to People Worldwide

“I never thought we were getting past the first [Rocky],” Stallone says while re-cutting the fourth installment in the series. “To this day I cannot describe what Rocky was, and maybe that’s the beauty of it that it just touches on a level that even I don’t understand.”

“No one goes through life without a bunch of bruised knees and sore knuckles, it’s just one big battle. And I think [the audience] identifies with that. Because quite often, life makes us go beyond what we think we can go beyond, and it’s scary when you’re being pushed into that unknown.”

The documentary is a masterclass in the art of filmmaking and is a fascinating glimpse into Stallone’s artistic mind.