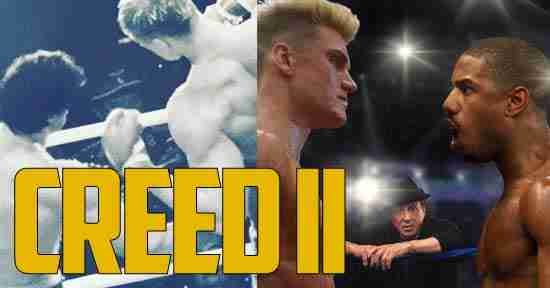 Do as Sly suggests: Use your imagination on this one

Sylvester Stallone has leaked another massive hint which is helping to confirm the Creed 2 rumors.

Stallone has released a Photoshopped image of Michael B. Jordan as Adonis Creed, facing off against Dolph Lundgren as Drago in the boxing ring. At the ropes? Trainer Rocky Balboa.

“Here’s a chance to stretch your imagination,” Sly has captioned the teaser mockup. “Life can be a brutal cycle!” The hashtags included? #creed2 and #agentnickyc, which is the official Instagram handle of Beverly Hills entertainment agent Nick Cordasco.

Back in May, 2017, Cordasco posted a photo of himself along with Stallone, posed behind the Rocky III motorcycle, which he’d just purchased for an undisclosed amount. Stallone had offered the iconic black and gold Italian Stallion themed motorcycle at his personal auction in December, 2016, but the high-ticket item passed with no buyers. Earlier this year, Cordasco also featured a photo of himself, Stallone, and Sly’s three Academy Awards.

But back to this image.

Coupled with Stallone’s recent behind-the-scenes photos of Rocky IV and his teaser of “maybe it’s time to try again” along with a photo of Apollo and Drago, the mockup adds more fuel to the Rocky IV flashback fires which have gotten fans excited.

Here’s a chance to stretch your imagination Life can be a brutal cycle! … #creed2 # agentnickyc

The photo can be interpreted any number of ways, which is going to cause a healthy debate among Rocky fans.

Is Adonis facing Ivan Drago, now in his 60’s, in the ring, as Rocky trains him? Rocky must have beaten cancer, right? Or is Adonis somehow going to do battle with a Drago, Jr. or equivalent opponent his own age? Whatever the case, the implications are pretty exciting.

Scroll down to the comments to let us know what you think the photo means!