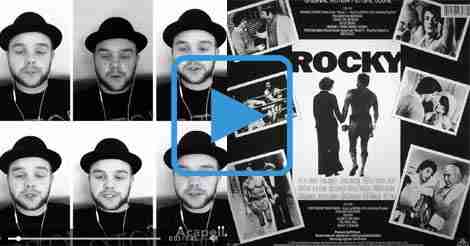 Anyone remember this from Rocky?

Boyd, who is currently performing his unique brand of blues, funk and soul in London, recorded Frank Stallone’s signature tune “Take You Back” as an acapella six-part harmony on social media this week. The coolest part? Boyd performs all six parts of the song himself.

Frank Stallone penned “Take You Back” and performed the song acapella with his band Valentine in the original Rocky back in 1976. You can spot Frank and the guys at the beginning of the movie as they sing the song on the Philly street corner near Rocky’s apartment.

Frank reprised “Take You Back” with updated versions for the soundtracks in sequels Rocky III, Rocky V and lastly in Rocky Balboa.

Boyd’s latest album “Fascination” has been released on iTunes and Spotify, featuring his singles the ‘George’ and ‘The Dead Of The Night’ that combine all the elements that have generated a big social media following for the performer. Additional singles and a tour are in the works this year.