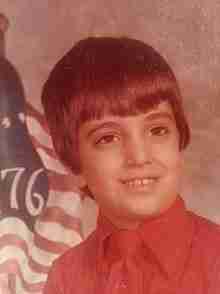 I was 8 years old and standing outside the Lowes American Theater in the Parkchester section of the Bronx waiting to see this new movie called “Rocky”.

Up to this point in my life it was all about “Happy Days”, “Batman” and the “Muppet Show”. Never did I witness anything on screen remotely close to what I was about to see from this unknown actor named Sylvester Stallone. I had no idea that after seeing this movie what a strong impression it would leave on me for many years to come.

I remember sitting in that small theater and being about 10 rows back from the front and watching this guy sitting a few rows in front of me screaming at the screen rooting for Rocky to knockout the champ.

Standing and yelling “C’mon Rock – Hit’em” “Hit’em” he yelled and threw punches as if he was also fighting Apollo Creed. This proves how this character had an immediate impact on its audience and how people were “all-in” right from the start.

After the final bell rang ending the 15th round I was filled with emotion. I had goose bumps and a lump in my throat feeling both happy and sad for this fascinating character. Happy, because he went the distance and wasn’t “just another bum from the neighborhood” and sad, because he lost and there “ain’t gonna be no rematch”.

However, I knew I wanted to know more about this truly likable guy from Philly. I was fascinated by the way he talked (especially by the way he said “Ya Know” after every sentence), his awful jokes, his honesty, passion and above all, his heart.

I know “Rocky” was a fictional character created by Sylvester Stallone but to me he was real, and I wanted to be just like him.

After experiencing the most influential two hours of my life, I asked my mom to buy me a gray hooded sweatshirt and pants. I matched them up with a dark green corduroy hat I had in the closet and cut up old pair of cheap leather gloves. I was physically in the Bronx, NY but my mind was in Philly running up those steps just like Rocky.