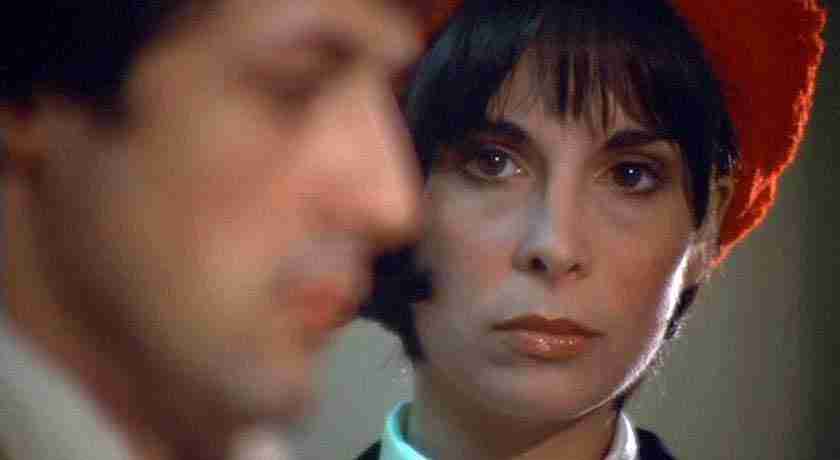 She was ringside at every fight after the Philadelphia lovebirds met 30 years ago in 1976’s Rocky. But yo, Adrian, she is no more.

In Rocky Balboa, the sixth and final chapter of the boxing saga (in theaters), the aging boxer reveals that “woman cancer” claimed her in 2002.

“In the original script (for Rocky Balboa), she was alive,” reveals Stallone, 60. “But it just didn’t have the same dramatic punch. I thought, ‘What if she’s gone?’ That would cut Rocky’s heart out and drop him down to ground zero.”

Says Burt Young, 66, who returns as Adrian’s brother, Paulie: “I was sort of part of that decision. There is a 16-year gap (from 1990’s Rocky V), and we have to fill this character’s history. Adrian’s probably more prevalent by not being in this movie than if she was.”

Stallone concedes that breaking the news to pal Talia Shire (Adrian) was not easy.

“She handled it with such dignity,” he says. “I told her, ‘Talia, you’re the heart and soul of this movie, but you’re just here in spirit, and that’s what’s going to drive the film. Your heart drove the first film.’ It’s what I call ‘The Adrian Factor.’ ”

Stallone invited Shire, 60, to the film’s Hollywood premiere Dec. 13, but the widowed actress was reticent, fearing the experience might prove too emotional. But she made a surprise appearance at the screening, and at the after-party she shared her thoughts and emotions.

Q: How did Sly prepare you for Adrian’s death?

A: Sly showed me the script because he knew I’d lost my husband (producer Jack Schwartzman). When Jack was alive, he and I were producing movies, so I was doing much less acting and more development. I was aware of the possibility of Adrian (at one point) being in it and dying (on screen), but my being in the movie or not was not as interesting as how Sylvester was going to achieve this. Ultimately, I was wondering how in the world he was going to justify getting Rocky back into the ring.

A: Rocky is a folk hero. There was a great mythological aspect to the first one, and this film has that. I am so in his corner. Sly is so gifted, and the writing in this piece is courageous. It is Rocky’s rebirth.

Q: Do you agree with Burt Young’s feelings that Adrian is even more influential in death?

A: That’s how many religions get going. Yes, the film has great regard for the process of mourning. Sly utilizes mourning to empower Rocky, and Adrian is made very mythical.

Q: Did your own spouse’s death (in 1994) make this whole experience even more poignant for you?

A: In our culture, we like to say, “Get over it; move on.” But you don’t move on. Our past is who we are, and death is one of our experiences. I lost my husband a long time ago, but it’s always yesterday. Watching Rocky wake up from a very lonely bed, searching for her at the grave, felt very familiar.

Q: There are so many sweet flashbacks of young Rocky and Adrian — at the pet store, on the skating rink. Do you remember those shoots?

A: I remember all of it. We didn’t have a lot of money in the budget. We started shooting the skating in Philadelphia, but we couldn’t afford to stay there, so we shot the rest in L.A., on an empty rink. And it turned out brilliant.

Q: Rocky takes another woman, Little Marie (a character introduced in the first Rocky), under his wing. Was it tough for you to watch their bond grow in this film?

A: Yes, it was. But it wasn’t sexual and felt very appropriate. And I liked the actress (Geraldine Hughes) very much.

Q: Did you cry at any point during the film?

A: I lost a button on my blouse because I had an explosive moment in the boxing ring (scene), because I felt that fight was really about a man going up against time and love and courage. Adrian wasn’t there, but she was very much within him.

Q: Have you dated since losing your husband?

A: Many years after, yes. But I never introduced anyone into the home. I waited for the cues of my children, who I think would love to give me away.