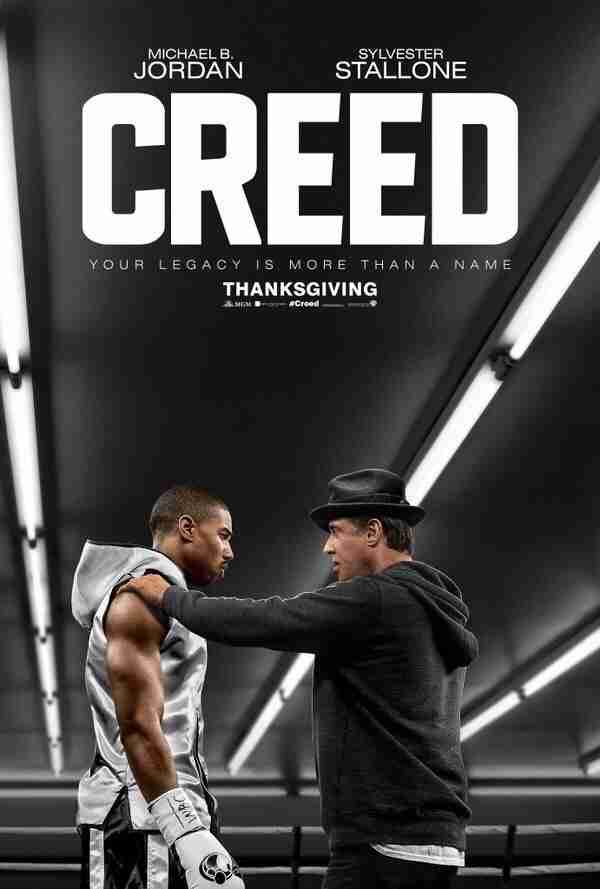 Roughly two months before its theatrical release in November, 2015, Warner Brothers has released its first teaser poster for the Rocky spinoff film “CREED”.

The “Creed” poster artwork is sure to hit Rocky fans with a simple but powerful image of Rocky Balboa in the boxing ring with his young protege, Adonis Creed – the son of his former opponent and friend, heavyweight champ Apollo Creed.

Designed in simple charcoal grays and muted whites, the poster artwork shows Rocky coaching Adonis, played by actor Michael B. Jordan, while standing against the backdrop of the boxing gym, whose fluorescent overhead lights create a subtle illusion of motion and are even somewhat reminiscent of the parallel train tracks that Rocky ran past in his original training montage.

In conjunction with the “Creed” poster, Warner Brothers has also debuted its first television commercial advertising the film’s November release in the United States.

The :30 TV spot is a micro-sized version of the full movie trailer and features very few seconds of footage not yet revealed, including a shot of a yellow taxi cab driving towards the Philadelphia skyline and a closeup of a black and white photo of Carl Weathers as Apollo Creed. This large framed photo could previously be glimpsed behind Adonis, hanging on the wall of the gym.

The TV trailer – set again to the music of Luis Fiasco’s “Prisoner” – also features an alternate phrasing of Rocky Balboa’s dialogue: “Your father was special. I don’t know if you are.”

This is in contrast to Rocky’s words to Adonis in the full theatrical trailer in which he positively compares Creed the younger to the Master of Disaster when he says: “Your father was a great man,” followed by: “I think you could be great, too.”