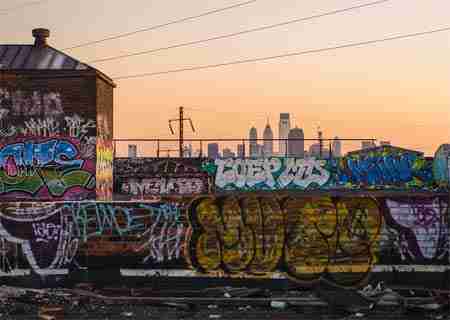 As Creed II’s Philadelphia filming continues this week, some huge surprises were revealed in terms of some major characters from the Rocky series who will be returning in the sequel. Filming of the Drago vs. Creed fight scenes in Philly should be wrapped by Monday.

Yesterday, Sylvester Stallone (costumed in his trademark fedora hat and a black leather jacket nearly identical to Rocky’s original black jacket) and director Steven Caple, Jr. shot a scene at Laurel Hill Cemetery where the prop gravestones for Adrian and Paulie were set up, along with a sprinkling of cinematic snow on the ground. Later in the day, the crew moved on to a neighborhood to shoot a scene set in Vancouver, Canada. See if you can figure out the exciting reasoning behind that tidbit!

“Life has become a balancing act for Adonis Creed. Between personal obligations and training for his next big fight, he is up against the challenge of his life. Facing an opponent with ties to his family’s past only intensifies his impending battle in the ring. Rocky Balboa is there by his side through it all and, together, Rocky and Adonis will confront their shared legacy, question what’s worth fighting for, and discover that nothing’s more important than family. Creed II is about going back to basics to rediscover what made you a champion in the first place, and remembering that, no matter where you go, you can’t escape your history.”

WANT TO BE IN CREED 2? CONTACT HEERY LOFTUS CASTING

Heery Loftus Casting is looking for additional extras for the movie, the production is even PAYING people to be extras. Imagine getting to see Rocky history being made and getting paid for it. Though the major fight scenes are coming to a close shortly, the company still needs local people in the Philadelphia area as filming continues through May, 2018.

The film is seeking both SAG-AFTRA and non-union extras, age 18+, all ethnicities. If you’d like to apply, contact creed2casting@gmail.com or visit castinghl.com.