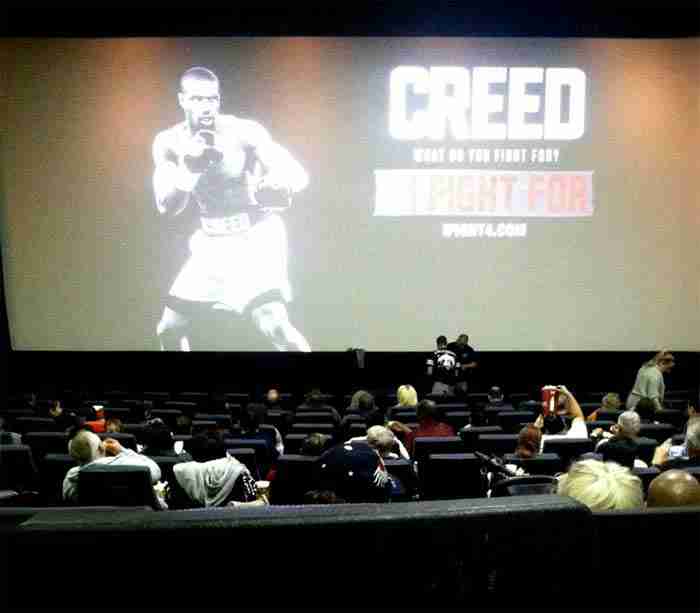 Last night we attended a special advance preview of Creed which was buzzing with anticipation.

The packed house of advance ticket holders waited over an hour bolted to their cinema seats before the film started, participating in some Rocky movie trivia along the way with questions like “Who was Rocky’s opponent in Rocky III?” (and only a dozen or so hands raised with the correct answer.)

The movie screen displayed a single image of Michael B. Jordan’s character, Adonis Creed, along with a promotion of Warner Brothers’ hashtag #ifight4, encouraging the audience to Tweet.

Interestingly, the moviegoers were a broad mix of people of varying ages and races, seemingly moreso than the audience of a typical Rocky film.

Several small children attended, excitedly running up the steps of the theatre to the highest seats with their dads cheering them on. It seemed that the majority of the crowd were not Rocky fans – which could be a promising look ahead to Creed’s success at the box office. It largely depends upon those outside the Rocky world discovering this film and claiming it as their own – especially if the rumored Creed sequels are ever to be produced.

We’re not giving away any spoilers in this particular post, but we will be publishing a full review of Creed on opening day, November 25.

We’re sure that most hardcore Rocky fans are going to fall in love with the Creed soundtrack. Swedish composer Ludwig Göransson brings a dramatic and powerful musical background to the movie, underscored with the feeling of Bill Conti’s original Rocky score. The finale piece “Fighting Stronger” is a fabulous piece of music that echoes the majesty of “Gonna Fly Now”, complete with a rich and dramatic chorus that both brings tears to your eyes and lifts you to your feet with its power.

“The music was a big focal point,” said writer / director Ryan Coogler of the iconic Rocky musical themes used throughout the series. “’Eye of the Tiger,’ ‘No Easy Way Out,’ all those songs were a massive hit. And we embraced that. We recorded original songs for the movie.”

The big question – what’s Sylvester Stallone’s Rocky really like in this story? Without giving anything away, let us just say that Stallone’s dramatic performance is like nothing we’ve ever seen from him. There’s been talk of a possible Oscar nomination for his performance in this film, and we can certainly see why.

A word of preparation for you Rocky lovers out there. The filmmakers weren’t kidding when they said that Creed is NOT another Rocky movie. It certainly isn’t. You’ve got to watch this film knowing that it isn’t trying to be anything that is familiar to you, or familiar to the series and characters that you know and love. This is a well written and well produced story about someone new, told from the viewpoint of someone new, and depicted in a new way.

Realism rules in Creed, and Rocky Balboa’s character is carried right along with it.