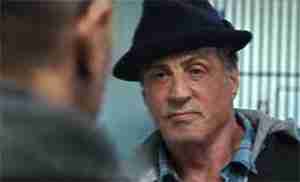 Get ready for some goosebumps, Rocky fans. The Italian Stallion is back on the big screen. The long-awaited theatrical trailer for Sylvester Stallone’s sixth sequel in the Rocky franchise debuted tonight in a well-placed conjunction with the opening of Arnold Schwarzenegger’s fourth movie in the Terminator series, Terminator Genisys.

The Creed trailer has officially been released to the public by Warner Brothers films, and the film looks to be powerful, gritty and dramatic. The trailer is focused heavily on the new character of Adonis Creed, played by one of Hollywood’s hottest young actors, Michael B. Jordan, as we are introduced to his life as a fighter. Creed, according to the dialogue, has seemingly trained himself up to the point of meeting his father’s one-time rival and best friend Rocky Balboa while visiting Adrian’s Restaurant.

Stallone doesn’t appear in the trailer until nearly 1:30 into the footage, and is shown sparingly to dramatic effect. Adonis questions him about whether it is true that he once had a third match with Apollo Creed behind closed doors, referencing the final moments of Rocky III in which Rocky and Apollo battle it out in the ring privately.

Fleeting frames where Rocky’s character appears to be ill are kept to a brief minimum. Best of all, we’ve even got a classic new Rocky Balboa quote, spoken by Sylvester Stallone at the end of the trailer as he locks eyes with Adonis Creed in the boxing gym mirror: “See this guy here – that’s the toughest opponent you’re ever going to have to face. I believe that’s true in the ring and I think that’s true in life. Now show me somethin’…”

The trailer ends with a punch and an extremely subtle piece of music – just three notes of Bill Conti’s “Gonna Fly Now” played softly on piano.

The trailer is currently viewable online and in US cinemas. Creed is scheduled for release on November 25, 2015 in the United States. So far only a handful of international release dates have been published: Argentina (November 26), Greece (December 31), Russia (January 14, 2016).