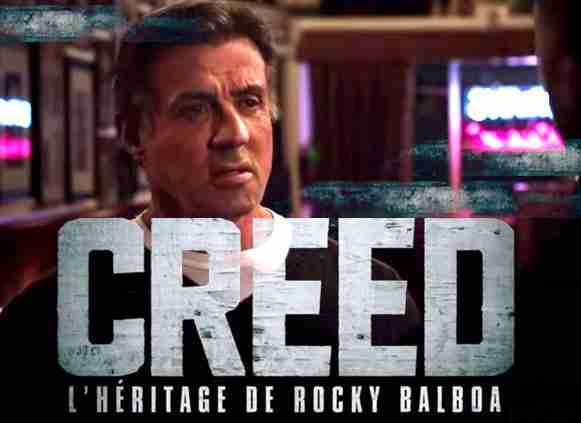 The new international version of the “Creed” movie trailer has debuted, with titles in French and stating the opening date of the Rocky spinoff movie as 16 January, 2016. The titles also feature a subheading: “L’Heritage de Rocky Balboa”, which is not present on the US trailer.

The trailer is extremely similar to the US “Creed” trailer which was unveiled back in July, 2015, but the international preview has a few slight changes, including an opening without the dramatic music of the US version.

“I’m his son. I want to talk to you about training me.”

The only major difference of interest hardcore Rocky fans is in the scene which takes place inside Adrian’s Restaurant as young Adonis (Michael B. Jordan) looks at the many career photographs Rocky displays on the walls of the dining room. “I heard about a third fight between you and Apollo, behind closed doors,” the young boxer says while looking at a black and white photo of Rocky’s first match with Apollo Creed in 1976. This version of the trailer omits Adonis’ line “This picture’s from the tenth round of the first fight, right?” and goes on to the moment when Rocky Balboa steps from the shadows asking, “How do you know all this?” Adonis replies: “I’m his son.” The new addition includes Adonis Creed’s line of dialogue: “I want to talk to you about training me.”

Another slight change is the editing surrounding Rocky’s new powerful line: “I believe that’s true in the ring, and I think that’s true in life. Now show me somethin’.” A few frames of this scene are new, as Rocky gestures to the gymnasium mirror with his eyeglasses. Previously these frames were hidden by the “Creed” title and appeared as a voiceover only.

Other bits include glimpses of scenes featuring Adonis and his girlfriend, and a shot of The Washington Monument at Eakins Oval which is the historic statue and fountain in front of the steps of The Philadelphia Museum of Art, and is the major landscape feature that is visible when Rocky looks out the city of Philadelphia from the steps. The trailer also omits the slow motion footage of Adonis training in his gray sweatsuit with the voiceover of Rocky’s quote from Rocky Balboa: “A great fighter once said: ‘It ain’t about how hard you hit, it’s about hard you can get it and keep moving forward’.”

Song Featured as Music in the Trailer

The song featured in both versions of the trailer is rapper Lupe Fiasco’s “Prisoner” (listen here), the full version of which contains explicit lyrics and focuses on the topic of prison incarceration. It was released in January, 2015 and although not written especially for “Creed”, the song works perfectly with the trailer, which happens to show moments of Adonis in a prison setting.