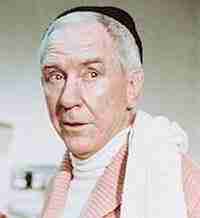 After 50-odd years in acting and more than 130 movies, Burgess Meredith, 71, eyes the cyclone of wealth and woe swirling around his co-stars with the kindly cynicism of Rocky’s trainer, Mickey.

“I know from past experience,” he nods, “when it comes down like thunder and lightning out of heaven, it’s not easy to shoulder.” He sees a close parallel to Orson Welles in his friend Sylvester Stallone. “People don’t like upstarts.”

“It’s different for me,” notes Meredith. But after a hell-raising youth of fights, drinking and romance, including flings with Hedy Lamarr and Marlene Dietrich (she once spit in his eye), not to mention four marriages, once to actress Paulette Goddard, Meredith has had his share of ups and downs.

Rocky II is just another up like Day of the Locust or Magic, and these days packs of kids follow him down the Malibu beach front of his woodsy, multilevel home.

Separated last February after 20 years from his fourth wife, Kaja Sundsten, Meredith now concentrates on his children, Tala, 27, and Jonathan, 28, his wine cellar and his neighbor John Lilly’s dolphins.

“I’d like to work on nothing right now, so that I could devote more time to the Human/Dolphin Foundation,” says its fundraiser-spokesman. But he has The Day the World Ended with Jacqueline Bissett and Paul Newman upcoming and is now in Malta finishing The Clash of the Titans with Lord Olivier.

“Working keeps me resilient,” he notes, “and resilience is the name of the game.”