Angel on My Shoulder – The Mickey Goldmill Story 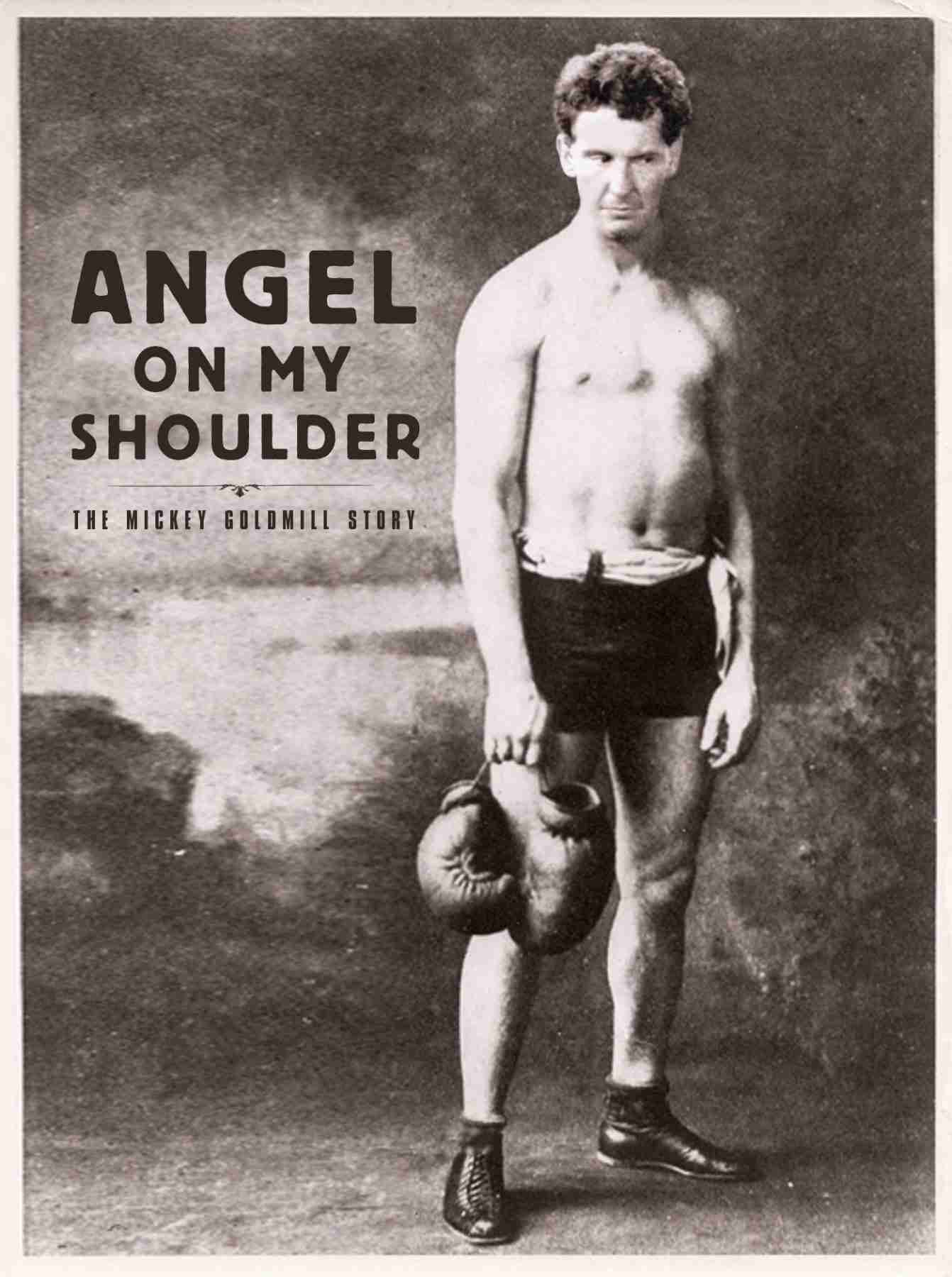 An Interview with Screenwriter Carl Kirshner

In the grand tradition of such boxing classics as Body and Soul and Champion comes the searing Rocky-inspired boxing drama Angel on My Shoulder – The Mickey Goldmill Story – a gut wrenching, powerhouse of-a-

movie that combines the tender heart of Rocky, the savage realism of Raging Bull and the heart-breaking emotion of The Champ. With its moving story and harrowing, edge-of-the seat finale Angel on My Shoulder is a movie that will stand proudly alongside its prestigious predecessor in the ever popular and enduring Rocky series.

Penned by award-winning UK screenwriter/producer Carl Kirshner, Angel on My Shoulder turns the spotlight on orphaned turn of the century immigrant Mickey Goldmill as he makes his way through the corrupt world of boxing in a bid to earn his self-respect and ultimately confront his father’s killer in the ring. Total Rocky is excited to give fans a glimpse of this interesting offshoot of the Rocky series in this interview with Kirshner, a former professional actor who achieved success in West End theatre but ultimately turned to his first love – writing movies. Since switching career gears, many of Mr. Kirshner’s scripts have been optioned and made by producers around the world, including Nightmare Box (winner of four best feature awards and one for best screenplay) and The Final Curtain.

What inspired you to write this story?

I had always wondered what made the character of Mickey Goldmill the man that he was. What were the events in this person’s life that shaped him into the grizzled no-nonsense trainer who, underneath all the toughness and gristle, had this amazing heart? Growing up I had known people who had become bitter through life’s experiences and lack of opportunity but I had always suspected it was merely an emotional guard they kept up to avoid being hurt. I saw this character trait in Mickey Goldmill where, in the first movie, it took Rocky’s shot at the title to expose his true inner-self in that wonderful scene where he describes how easy it is to lose your one chance at glory through circumstance. I had wondered about what kind of a life this guy must have had who, on the one hand, is tough and heartless but on the other is like some kind of guardian angel figure and it bugged me for years why no-one ever made a movie about this wonderfully rich, diverse character. After all everyone who loved Rocky loved Mickey, too.

I mean, some of the very best scenes in the series revolve around Mickey. Who can forget the great “I didn’t have no manager” scene from Rocky; or the “fight this guy hard” in the church from Rocky 2; not forgetting the death scene “I love ya’ kid” from Rocky 3 and of course the wonderful “Angel on your shoulder” speech from Rocky 5. The list goes on and I truly feel that without this character and Burgess Meredith’s amazing acting, the films would be somewhat poorer in heart and spirit for his absence and I wanted to tribute that feeling and love we all have for Mickey Goldmill.

How long did it take you to put the story together?

About 6 months and I never did a second draft but I did cut a lot of graphic violence from the script on the advice of an industry professional I knew who had experience with studio execs and assured me it was far too violent for a mainstream movie. It remains staggeringly brutal but totally acceptable for the incredible story I am telling.

Is this story based purely on what we fans know of Mickey Goldmill from the ‘Rocky’ series, or did you delve into some deeper research about his character?

It was all from the movies I had seen. There was virtually none or very little info on the character anywhere so I sketched out a life for him. I looked for events around the early 1900’s when he was born where I could kick this story off. I finally went with the classic Jack Johnson/Jim Jefferies fight in Reno where we first meet Mickey and his father and the tragic turn of events that transpire that day that shape his brutal future. I then outlined his life from the age of 6 until 68 just before Rocky Balboa came a force for change his life. I thought this man would have suffered staggering poverty and racism as a turn-of-the-century homeless Jewish orphan whose opportunities in life at that time were probably limited to harsh labour or a life of crime. Once I cemented the direction and tone there was no stopping me.

I had a little help from a hard core Rocky fan on technical details like where was the exact location of the church in Philly where Rocky got married in as it was an important place for the young Mickey in the story, and also advice from real boxing trainers so that I got the old historical style of training down correctly as I wanted it to be as accurate as possible; but it was just basically just plain hard work and imagination – 12 hour days – non-stop living, thinking and breathing this man’s life story.

I watched as many of Burgess Meredith’s movies as I could when he was younger to try and capture his personal mannerisms and traits to flesh out his younger persona as, for sure,we know what he became but I wanted to know what he ‘was’ and it helped a great deal. It was almost like watching the young Mickey for real. I also took in ALL the boxing movies I could find and was inspired by various emotional aspects of what worked and steered away from what I felt wouldn’t work for ANGEL. I feel we have a unique film here, but one that is faithful in tone to what the fans would expect.

I wanted to flesh out the history of the Rocky characters and answer some burning questions that I know the fans would have wanted to know. How did Mickey get into boxing? Did he know Adrian and Pauly’s parents? Did he ever get involved with Gazzo’s crime family? Had he ever come across Clubber Lang’s father in the ring and if so did he win? Was he a street fighter? Did Rocky have a father? Why did Mickey never marry? What was the savage fight like he had with the boxer who put a nail in his glove and made him spit blood out of the holes in his cheeks? Where did he learn to train with chickens! Well, all these questions and many more are answered in the movie… and then some. All I can say is, as a true fan, you are all going to LOVE this movie!

Any thoughts on possible casting choices?

Oh, well as much as I would like this actor or that actor ultimately it is down to the director and producer’s artistic decisions, but some names that I had toyed with to sketch out the mental image of the characters were Kevin Spacey, Gary Oldman, Jason Statham and Frank Stallone – for Mickey’s love interest, Angelina, I envisioned Emma Watson or Amy Adams. As for Mickey himself, there were a few names I had in mind but I wonder what the fans would suggest as that would be very interesting!

Have you, or do you plan to present this screenplay to Sylvester Stallone?

I haven’t yet as I felt the timing hasn’t been right and that is very important in this business; however due to the recent talk of a possible Rocky ‘character spinoff’ with the proposed Creed film the time is fast approaching when this project could be a real possibility for all the fans around the world. They will be very different films in tone and style but hopefully both be the great movies the fans deserve. With enough interest from the fans we could all make this a reality. If we want this to happen emails to the official Sly website about the script would be a great first step towards convincing the powers that be that there is a BIG demand for this movie. If we pull together in the true Rocky spirit we CAN make this happen. Together we can “eat lightning and crap thunder!” to quote Mickey.

One thing that might be of interest is I did test the industry waters recently with a version of the script. I just knew it worked great, but I needed a professional opinion as confidence is one thing but competence another and I am my harshest critic So I figure, “Okay, I will change Mickey to a generic character just for now, as I guess no-one outside of MGM or Sly’s circle will entertain a franchise script from me.” and so sent it to a great producer who got back to me in a couple of days and said NEVER in 30 years of the business did ALL of his readers in his company – both male and female – give a recommend for production. This coverage was amazing! I was totally bowled over, but then they sent it to an Oscar-winning director – whoa, you could have knocked me down with a feather! He had just finished a movie about boxing and understandably didn’t want to get in the ring again, however, such was the impact it had it went right to the top echelon of Hollywood elite. I was in some way relieved that it never went that way ONLY because it wouldn’t have been Mickey’s story as I greatly admired the producer and director. This was a great thing to happen in a way and made me commit to making this Mickey’s story.

You were able to attend Mr. Stallone’s special appearance at the London Palladium in January, what was the experience like?

Amazing! What a great night. I wish all of you could have been there. It was really emotional when he first appeared – I had tears of excitement to see him again. I had met Sly before but this time it just felt even more special and I was lucky enough to ask him personally if he would consider producing a movie about Mickey Goldmill. I first asked the audience and they went crazy for it! I was stunned by their reaction but then he answered me and said:

“Now that’s a great idea – I really like your idea!”

Big cheers all around. It was a great moment for all of us true fans and now it is on Sly’s radar anything can happen now and if we pull together… it WILL!

This was a true labor of love for me and although it was a long, hard and lonely process creating his life,  I know in my heart that this movie WILL WORK – and in a BIG way. If Sly wants to give the fans all over the world – and there are millions of them, a commercial and fitting tribute to a popular character that has both moved us and inspired us as Rocky fans and human beings, well, it’s all here. The heart and soul of Mickey Goldmill and every Rocky fan in the world is in every word… and in every page.

Keep Punchin’ and let’s GO FOR IT!

Read selected scenes from the screenplay!