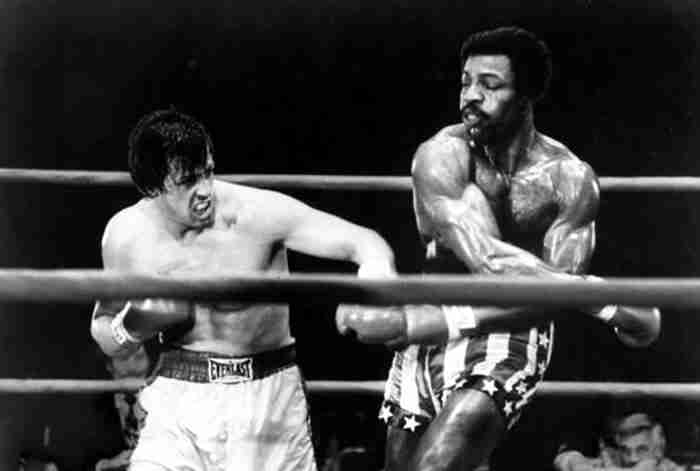 The 6-foot-3 former Oakland Raider football player remembers well what he had to go through for the coveted part of Apollo Creed in the movie Rocky, a role that catapulted him into the big tune.

Writer/star Sylvester Stallone and director John Avildsen hadn’t found, the man to play Creed, a black world’s heavyweight boxing champion. They were busy interviewing “just about everyone in the country, as I recall,” Weathers said.

“When the script came to me, nobody knew who I was. So the trouble I had was convincing them I was big enough, bold enough, brash enough and talented enough to pull it off. I went in that office and literally went through hell. I had to lie, I had to do anything I could to convince them I could pull it off.

“I’d NEVER boxed before, but I told them I did. I mean, I not only told them I boxed, but what my record was and where I fought. I’ve found from my own personal experiences that what they’re looking for isn’t always the tried and true, but someone who believes in himself or herself,” Weathers said.

“There’s one thing you learn right from the beginning as an actor, and that is that you never say no when they ask if you can do something. Or you’ll never work.”

And Weathers has put his philosophy into action during his fast four-year rue to semi-stardom since he retired from pro ball in 1973. For a guest role in the television series “Kung Fu,” Weathers was asked if he could ride a horse. He said he could.

“I couldn’t ride. I started thinking. ‘Who can I call’ Who do I know who can ride’ I always do that after I’ve told that lie. How am I going to carry this off?” Two days later Weathers the cowboy was on a horse working. “I was scared to death” the actor recalled.

Weathers also had to take a crash course in scuba diving after fibbing to another television producer.

But much lying and hard work to back up the lies have paid off for the actor who started his career in commercials. “At least I got my Screen Actors Guild card that way,” he said. “I did commercials for Annie Green Springs, Miller beer, United Airlines and one for McDonalds. I was a guy who worked construction and got a Big Mac attack and I walked through brick walls and all that stuff to get to a hamburger. Crazy, stupid sorts of things, you know.”

But the commercials provided him with work and a living.

He also won a role as an extra in the movie The Candidate with Robert Redford. It was an experience that made the former football player decide early in the game he wanted to run the plays and not be the tackle for someone else’s glory.

“I DIDN’T really know what I was doing,” Weathers said. “But the thing I didn’t like was that I was in the background and Robert Redford was in the foreground, I vowed never to do another extra part.”

His first attempts at scoring in movie and fumbled.

He was in a forgettable film called Buck Town, then appeared in Four Deuces with Jack Palance, a movie not even released in this country.

He received his first notices when he appeared in “Friday Foster”, a 1975 black-oriented show that is resurrected periodically in the Loop and ‘they still make a lot of money even today,’ Weathers said.

“Rocky at least put me in the minds of many people around the world and probably was really the beginning of my career,” Weathers said.

“It afforded me the opportunity to learn about the film industry. Rocky really started me thinking, what kind of film do I want to do next?”

That answer came when he was not only given a script for the new American International Pictures movie Force 10 from Naverone, opening in the Chicago area next Friday, but had a role written virtually for him. The original Alstair MacLean novel “Guns of Naverone,” upon which the new film is based, had no tough black soldier in it.

“It wasn’t the sort of thing that reached out and grabbed me by the throat and said ‘You HAVE to do this’, but it served my purposes,” Weathers said, adding that the script was well written. “Most roles are overwritten. Once you’ve said the words, you’ve told the story – there’s no room to act.”

Another reason he went with Force 10 was the number of stars in the film.

Next up for the burly actor is another continuation film called Rocky II, in which he will revive his rote as heavyweight champ Apollo Creed.

Weathers probably got the role initially because of his brash blunder while trying out with Stallone and director John Avildsen in their offices. It seems that Stallone was introduced to Weathers as the script writer, not the star. Weathers, an unknown, was brought in late in the day after the fatigued men already had heard umpteen actors.

“We started reading and he (Stallone) never looked into my eyes. How can you talk to someone and never look them in the eyes? I became infuriated. This was my only shot and I knew it. While reading that script I knew it was meant for me. But the guy never looked at me!

Then the producer, director and Stallone (who won an Academy Award nomination for his role in Rocky) started laughing. Weathers knew something was wrong. “Right away I said, ‘Oh oh. I’ve blown it. I’ve stepped on somebody’s toes.’ But then John laughed and told me, ‘I like you.’ The rest is history,” Weathers said.

And so Carl Weathers is well on his way after trading the bone-crunching life of a football player for something more cerebral.

“I started playing football in seventh grade. I felt physically incompetent really, but there was more to it than that. There was a girl I wanted to impress and all the football players seemed to get the pretty girls. So I thought if I could play football, I could get this pretty girl.” He grinned. “And I did.”

But five years in the pro ball racket took their toll on Weathers, who readily admitted “I wasn’t doing such a great job. So I came to the conclusion this wasn’t what I was meant to do. I love acting and here I am.”