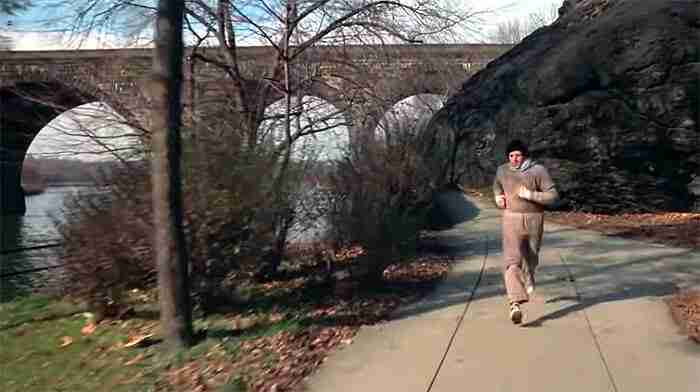 During the “Gonna Fly Now” training montage in the original Rocky, Sylvester Stallone is seen in his grey sweatsuit running alongside Philadelphia’s Schuylkill River with an arched stone bridge behind him.

The Schuylkill is a hotspot for Rocky filming locations in this area of Philly. It runs right past Laurel Hill Cemetery, where the characters of Adrian and Paulie Pennino are buried, as featured in Rocky Balboa and Creed, then winds past the Philadelphia Zoo on the west side, seen in Rocky II as the spot where Rocky proposes to Adrian.

Keep going south and you’ll hit the stone arched bridge and within a mile or so, end up at the Rocky Steps at the Philadelphia Museum of Art where Rocky completes his training triumphantly atop the museum steps.