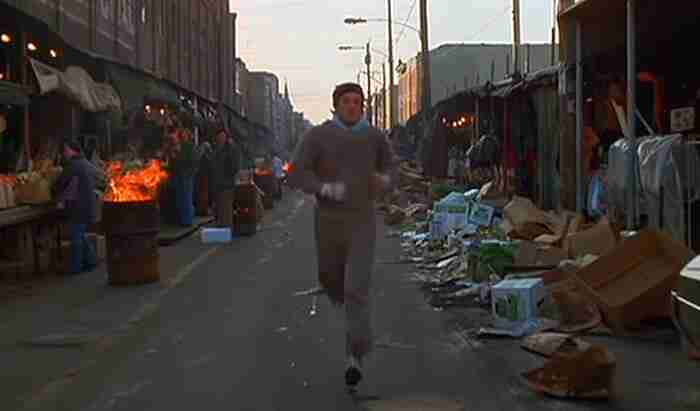 The Champ returned to this popular area to work out with Tommy Gunn in Rocky V, and again in Rocky Balboa when he was seen buying fresh food for Adrian’s Restaurant.

For the original Rocky, the film crew shot-and-ran during the filming of scenes such as Rocky Balboa’s run through the Italian Market, proceeding without permits and without having to clear the streets.

In the first shot at the market in the original movie, Rocky is running south down 9th Street, eventually coming to the intersection of Washington.

When Sylvester Stallone initially ran through the Market (and around other parts of Philadelphia), he was completely unknown, so no crowds of fans pushed in on the small production crew in 1976.

The memorable moment in which one of the Italian Market’s vendors tosses Rocky an orange as he runs past happened completely spontaneously. According to the story, the market vendor was unaware that a film was being shot and just happened to throw an orange to the grungy jogger in the gray sweatsuit. The moment looked great on film and was left in the final print to become part of Rocky movie history.

For Rocky Balboa (2006), Sylvester Stallone chose Giordano Fruit and Produce at 9th and Washington as one of the food suppliers for Adrian’s Restaurant. Since 1921, Giordano’s has offered fruits, vegetables, cheeses, pasta and more for the local Philly restaurant industry.

What’s cool is, 9th and Washington was this same corner that Rocky ran past in the original movie.

The Italian Market is a hotspot for locals and Philly tourists alike, billing itself as “America’s Oldest Outdoor Market”.

Indeed, this ethnic community began gathering in the late 19th and early 20th centuries and was for many years known as the 9th Street Market. It wasn’t until the 1970’s that it became known as the “Italian Market”.