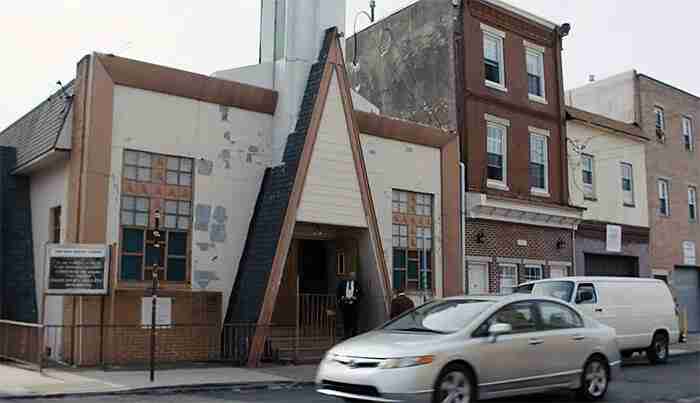 In a deleted scene from Creed II, Rocky is seen entering this dingy little church on 20th street just south of Ellsworth Street.

Located in South Philly, in between Ellsworth Street and Annin Street, King David Baptist Church is still operating (as of 2021). Both the exterior and interior of the church were used during the filming of this scene.

The tiny church has but a few mourners there for Spider, mostly the cooks from Adrian’s Restaurant. When he realizes no one else will stand to speak for the old fighter, Rocky moves to the coffin to give a heartfelt eulogy.

Spider Rico and me, we go back a long time.

He said he came from out west, said he lived in the desert and that’s where he learned to fight. Anyway, we met fightin’ for peanuts at, couple days before Thanksgiving at this old church. And you give me this world class head butt, and I said, yo, somebody that fights dirtier than me.

Then a lotta years later you showed up at the restaurant and said, ‘Remember me?’. Absolutely. And the head butt stories.

I remember you sayin’ that you had this daughter but you couldn’t remember where she lived cause of all the shots you’ve taken. I get that. So, me and the cooks we become like your family.

You know in the ring, you got rules. Outside – in the street – you got nothin’. Then life hits you with all these cheap shots and a lotta low blows and you take ’em, you move on, but we feel sorry for ourselves and say ‘yeah’ … but we didn’t do that.

I’m sad you’re gone cause you’re like my last friend from the old days, but I’m glad too, cause I know wherever you’re goin’ has gotta be better than where you’ve been.