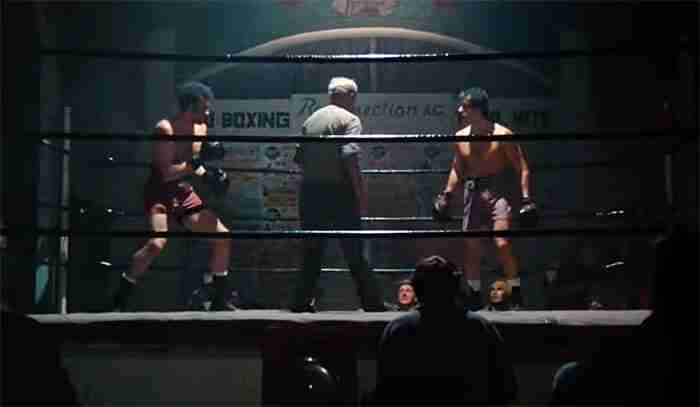 The opening shot of the original Rocky – and the series – begins with a painting of Jesus overlooking the dark, dirty boxing ring where we’re introduced to club figher Rocky Balboa, battling with opponent Spider Rico.

Fourteen years later, Rocky (and Sylvester Stallone) returned to this location to film one of Tommy Gunn‘s fights for Rocky V.

These scenes were shot on location in East Los Angeles at the old Resurrection Gym, where boxer Oscar De La Hoya trained as a kid in the early 1980’s.

Resurrection first opened in 1924 as a church, eventually ditching its pews and morphing into a boxing gym.

In the mid-1990’s, it was purchased and renovated by De La Hoya who transformed it into the Oscar De La Hoya Youth Center whose aim is to help keep inner-city kids out of gangs.

Looks like that turned out to be true – while the portrait of Jesus was removed, the old structure and beams that you can see behind Rocky and Spider still existed, repainted in white.

Sylvester Stallone's Story Behind Rocky's Boxing Glove Necklace
Rocky's House in "Creed"
Andy's Bar
This Much Is For Sure: 'Rocky V' Is Here Today
← Hotel Lorane Ice Skating Rink (First Date) →
Back to other locations