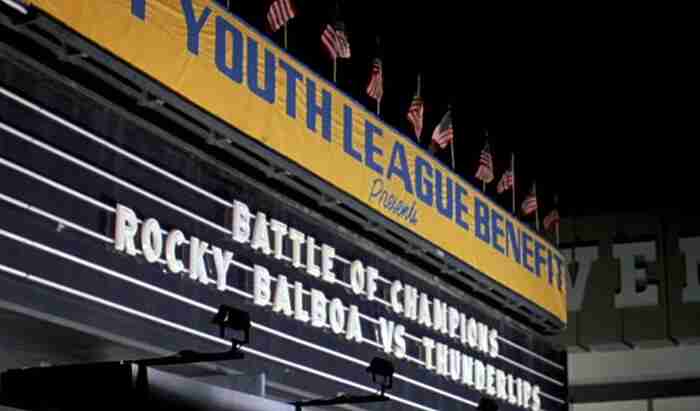 Following in Bob Hope’s footsteps, Rocky accepts an exhibition challenge to battle a giant wrestler for charity. The movie world was introduced to WWF superstar Hulk Hogan in his first on-screen role as Thunderlips “The Ultimate Male” here in Rocky III.

The establishing shot for the charity match was filmed on the marquee of the Los Angeles Convention Center with a banner advertising the City Youth League’s benefit “Battle of Champions”, Rocky Balboa vs. Thunderlips.

In the movie, we’re meant to think that Rocky and the gang are back home in Philadelphia (not in Los Angeles, though they’d travel there later in the film), so only a few letters of the Convention Center’s sign are visible on screen.

Following a freak L.A. tornado in 1983, the Convention Center was repaired and renovated, but in the 21st century the complex has been totally remodeled so that nothing of its Rocky III appearance is left to see.