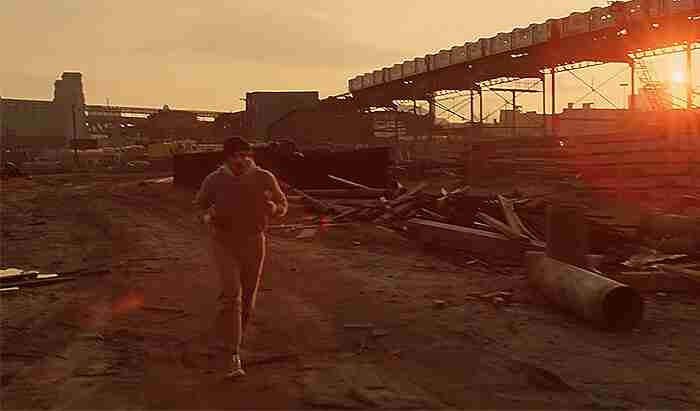 In the very first scene of the original Rocky training montage, we join Rocky as he trains on an early Philadelphia morning, holding a pair of bricks as makeshift weights, running through a railroad yard.

This is the first time in Rocky movie history that “Gonna Fly Now” is heard.

Rocky jogs through what is today a self storage facility which is surrounded by a chain link fence. A few of the landmarks visible in the movie are still there today.

Let’s jog through them!

In the background adjacent to the setting sun (this scene is meant to take place at dawn, but appears to have actually been filmed at dusk), is the Benjamin Franklin Bridge, also visible in at least one other scene from the original movie.

Up until about 2015, there was an unobstructed view of the bridge’s anchor block base very similar to what can be seen in the movie. Since then, a large building has been constructed which blocks the view of this recognizable portion of the bridge. 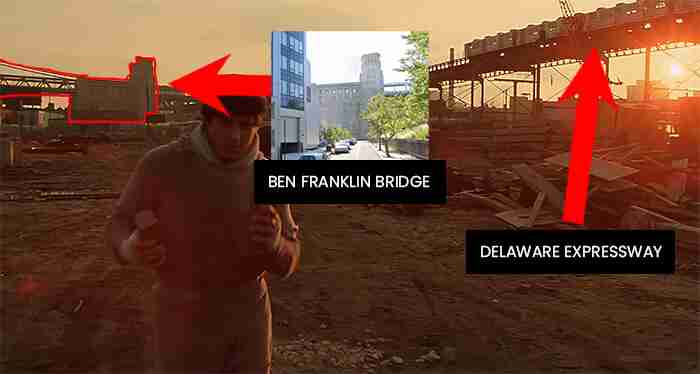 Sylvester Stallone then jogs past twisted metal and discarded debris in the old Philadelphia & Reading Railroad freight yard and onto a curving railroad track.

Today, this track has been removed but its original location would have been roughly at the north edge of the storage unit property.

With his back to the camera, Stallone then approaches a large brick building with a green drainage pipe at the corner, and heads towards Christopher Columbus Boulevard. This building, an abandoned warehouse, is one of the few land markers still visible – for the last several years, it’s been recognizable in the area as having a huge American flag mural on the south wall that would have faced Rocky, which is pretty cool.

On the Rocky Bluray, finer details are visible which show some damage to the bricks in certain spots at the corner of the warehouse – these flaws are still visible on the building today.

If you jog east along Noble Street, towards Christopher Columbus Blvd., you’ll be running in Rocky’s footsteps.

Tip: If you cross Christopher Columbus Blvd., you’ll be near Pier 24, the location where Rocky collects Mr. Gazzo’s money from Bob, the dock worker.

This very elusive filming location is one of a few in the area which are interesting from a filmmaking perspective. The original Rocky production was famously low-budget and on a tight schedule, without filming permits in the city of Philadelphia.

We’ve heard the stories about Stallone and the camera crew hopping out of a van to grab some footage of Rocky working out, and this really becomes evident when you can see spots from the movie on a map. They’re all really close to each other and had “the look” needed for Rocky’s world.

← Rocky II Chicken Chase
Back to other locations