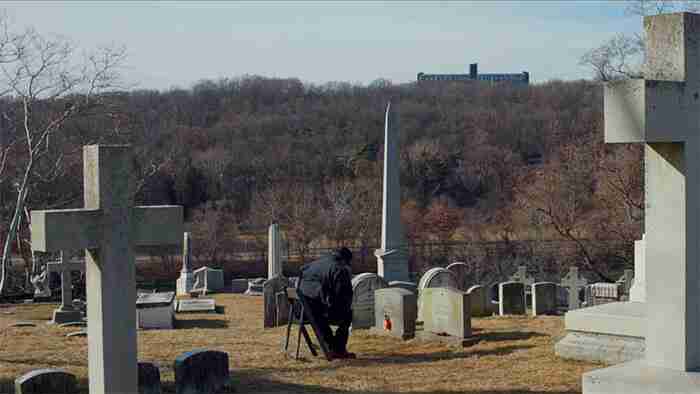 Used as the site of Adrian’s grave in Rocky Balboa, and later as Paulie’s final resting place next to his sister in Creed, this old cemetery is the final resting place of many a famous name – including one of the signers of the Declaration of Independence.

After the filming, the production crew left Adrian’s headstone behind and since then it has actually been displayed on the grounds, many visitors have mistaken it for the real thing.

Two versions of the Adrian headstone were made, one which was more weatherproof was left with the cemetery, the other was a lightweight prop used for close-up shots.

Sylvester Stallone ultimately auctioned the prop headstone in his 2015 auction at Heritage.

Adrian’s headstone is (usually) located near the front gates – you can ask the cemetery for it’s specific location.

Rocky’s chair was kept in the tree for a brief period after the filming; the movie crew had bolted the chair to the tree for some final shots, but it was taken down due to wear and tear from the weather.

Sadly, the old tree was removed in the intervening years and a new tree has been planted in its place.

Robert's Office Building
Stallone to Get Back at Critics with 'Rocky VI'
Why Sly Says "Creed" Could Be the End of Rocky Balboa
How Coogler's "Creed" Stacks Up Against the Films of 2015
← Bonwit Teller & Co. Madison Square Garden →
Back to other locations