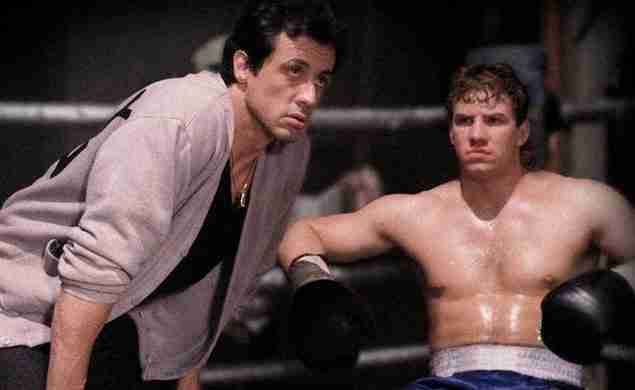 At 26, boxer Tommy Morrison was two fights away from a shot at Mike Tyson, the then-heavyweight champ, and a $38.5 million prize.

Already a millionaire, he had starred alongside Sylvester Stallone in Rocky V and lived an indulgent lifestyle complete with parties and women.

His boyhood home of Jay, Oklahoma — where he and his family had barely scraped by — had erected signs along both ends of the two-lane highway leading into it, proclaiming the town “Home of WBO Heavyweight Champ Tommy Morrison.”

The signs in Jay came down within the hour, and Morrison’s career was effectively over.

Now, eight years later, the more settled Morrison has traded time in the ring for time with his family in their quiet home about 95 miles east of Nashville, where they moved in May. He and his wife, Dawn, are fighting to ensure that HIV — the virus that robbed him of a chance at the title — doesn’t rob them of a chance to have a healthy baby. The couple, who lives in Sparta, is using an experimental sperm-washing procedure in hopes of having a child without infecting it or Dawn.

Morrison can’t say for sure how he contracted HIV, but says he’s had more sexual partners than the legendary Wilt Chamberlain, who claimed to have had intercourse with 20,000 women.

In the ring, Morrison had an exciting, intense style that — along with his wild ways — caught the public’s attention, recalls Dr. Flip Homansky, a commissioner with the Nevada State Athletic Commission. “He’s the kind of fighter that could’ve had an enormously profitable career,” he says.

Morrison changed the sport of boxing, but not in a way he wanted to. In 1996, Nevada was the only major boxing state to test boxers for HIV. Since Morrison’s diagnosis, testing has become commonplace in states where boxing is a major sport.

Morrison emphatically argues against the widely held belief that the HIV virus causes AIDS. He says he occasionally considers legally challenging his suspension under the Americans with Disabilities Act.

After being ousted from the ring, Morrison’s life continued to plummet. He wound up in prison before finally settling down.

His hometown and many people he thought were friends gave him the cold shoulder. A 1998 fire destroyed his home. The fire department couldn’t determine the fire’s cause, but Morrison believes it was arson. “I know how it happened,” he says. “They didn’t want me in that town.”

Morrison moved across the border, to Fayetteville, Ark., where he found more trouble.

In December of 1999, police found cocaine in his car. He says someone he had loaned his car to used it to deal drugs. Either way, he spent “14 months, 8 days, six hours and 46 minutes” in prison.

The adage that while in prison you find out who your real friends are rang true for Tommy Morrison.

He and Dawn had had an off-and-on relationship since they met in 1994. They married in 1996, a marriage that ended in an annulment two years later.

They remained friends, and Dawn soon found herself making the nearly 300-mile trip from Tulsa to Texarkana to visit Tommy in prison.

Tommy was released in February of 2001, and he and Dawn remarried that year.

They wanted to put Tommy’s wild days behind them, but found that Fayetteville was not the place to do it.

“We just wanted to get away from all of that and have new, clean start in a little, small town so that we could raise our family,” Dawn Morrison says.

They went to Sparta to look at property and decided it was where they needed to be. They currently live in a modest three-bedroom house that they hope Morrison’s mother will eventually move into. They are currently looking for property on which to build a new house with a mountain overlook.

Thirty-year-old Dawn works part time as an interior designer. Tommy draws a monthly disability check and is writing an autobiography. He’s also trying to get back into movies, and will begin filming a still untitled B-movie in June.

Their immediate concern, however, is building a family.

Tommy has two boys, Trey, 13, and McKenzie, 12, by previous girlfriends. Both boys live with their respective mothers in Oklahoma.

Tommy and Dawn have a 3-year-old son, Justin, who was conceived during their first marriage. The Morrisons wouldn’t discuss how he was conceived, but say he is healthy and HIV negative. Still, Dawn doesn’t want Justin to be an only child.

“I always knew from the time I was 12 that I’ve wanted a big family. I’ve wanted six or seven or eight kids,” she says, with a slight giggle. “Now I’m down to five. Tommy’s down to one more.”

Medication and proper care can help prevent HIV-positive mothers from transmitting the virus to their babies during childbirth, but in cases such as the Morrisons, where only the father is HIV positive, the challenge is to achieve pregnancy without spreading the virus.

Through the Internet, Dawn found Ann Kiessling, who in 1996 founded the Assisted Reproduction Foundation in Boston to help couples with infectious diseases such as HIV safely have children.

Kiessling, a virologist and embryologist, is also an associate professor of surgery at Harvard University Medical School, which is not affiliated with her foundation.

Kiessling’s procedure takes advantage of the idea that in HIV-positive men who are otherwise healthy, the virus is found in the fluid surrounding the sperm but not the sperm itself.

The semen is mechanically separated into layers that are tested for HIV. If the virus is found in any of the layers, the entire sample is thrown out. The ”washed” sperm is used to fertilize eggs in a petri dish so that the woman is not exposed to live sperm.

Sixteen babies — all HIV free — fertilized through Kiessling’s procedure have been born.

A similar procedure, where the washed sperm are injected into a woman’s cervix, has been done in Europe for more than 10 years. Kiessling estimates that there have been between 100 and 150 births worldwide.

Still, the federal Centers for Disease Control and Prevention does not recommend the procedure. In 1990, a woman undergoing the European procedure later tested positive for HIV, although it’s unclear whether the procedure or unprotected sex was to blame.

“It’s biologically plausible that semen processing could reduce the transmission (of HIV),” says Dr. Ann Duerr, HIV section chief in the division of reproductive health at the CDC, “but we really don’t have enough data as far as studies to determine precisely its effectiveness.”

Kiessling agrees, and says that scientists won’t be able to give statistically meaningful risk assessments until 500 children are born.

She anticipates slow progress, primarily because of a 1996 ban on federal funding for research involving fertilized human eggs that makes it “nearly impossible to organize a clinical trial.”

Finding private support for the research is also tough, she says, because the public still views HIV infection as something people bring upon themselves, even though many of the people Kiessling wants to help are hemophiliacs infected before blood was screened for HIV.

Kiessling is one of two doctors nationwide who help people with HIV safely have children. Only six clinics nationwide have partnered with her to implant the embryos.

“Tommy, particularly, is angry at how hard this is for them to do,” Kiessling says, “and he would like to make it clear that there are ways for couples to (have children).”

The Morrisons first met with Kiessling in Boston in March 2001. Tommy had to stop taking one of his HIV medications because it was reducing his sperm count. In January 2002, they flew back and collected a specimen, which Kiessling’s clinic washed.

The specimen was sent to a clinic in Chattanooga, where Dawn underwent her first in vitro fertilization cycle in July. The procedure cost more than $12,000, but the embryos didn’t implant. The procedures aren’t covered by health insurance, but Morrison says he invested well and saved money from his days as a boxer.

The entire family, even young Justin, was disappointed by the failure. “He thinks they fell out of Mommy’s belly,” Dawn Morrison says.

Early last month they tried to implant embryos fertilized back in July, and the couple waited through the holiday season with anticipation.

“It’s something that seemed so out of reach when we first started this process,” Tommy says, sighing. “But we’re getting a lot of encouragement from the doctors, so we’re excited.”

Just after Christmas, they received the news; their second attempt last month was a success.

Dawn is pregnant, and the Morrisons are looking forward to a bigger family. Dawn wants to start shopping for baby clothes, and young Justin has already told his mother that he wants a baby brother. Tommy wants a boy — who he wants to name Raven Thomas despite Dawn’s objections — but also wants a daughter.

“What’d I’d like to have is one of each,” he says, “and that would keep us busy enough for a while that we wouldn’t have to go through all of this again.”