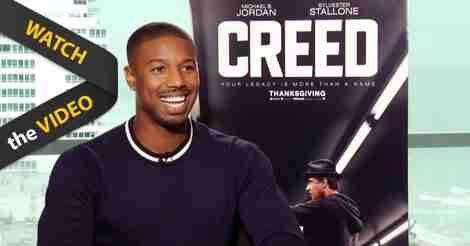 Don’t miss this one – here’s one of the very first detailed interviews with actor Michael B. Jordan, star of the Rocky spinoff movie Creed, which will hit theatres across the United States and Canada on November 25. (See more international release dates HERE.)

The interview was conducted on October 16 by entertainment reporter Chris Van Vliet from WSVN-TV in Miami, who also happens to be a big Rocky fan. As such, he was able to ask the questions that are most meaningful to the fans of Sylvester Stallone’s iconic series.

“Rocky’s kind of traded places with Mickey,” Michael B. Jordan explains of Sylvester Stallone’s role as his character’s trainer in Creed. Although Rocky stepped into Mickey’s shoes once before in the series, in 1990’s Rocky V when he coached up and coming boxer Tommy Gunn, the direction that the story takes with Creed should have a much more powerful (and emotional) effect.

Sly said it himself, this story is “not Rocky 7, it’s Creed 1”, yet we can’t help but look for traces of the last six films in the series in this new take on the franchise.

Besides a few glimpses that have been noticed in the movie’s trailers so far, such as Rocky’s black tiger jacket hanging in his basement along with his championship belt, the appearance of Rocky’s turtles Cuff and Link (although the turtles used in Creed are not the real Cuff and Link, who still live in Philadelphia). Several images of both Apollo Creed and Rocky Balboa appear in background scenes of the trailer, including one fairly odd choice – the poster image of Rocky wrapped in the American flag from Rocky IV, which, rather than being cool, kind of shocks you out of the “reality” of this new twist on Rocky’s story and makes you think of Rocky IV as just a movie and not a part of Rocky Balboa’s life and career.

“You have a lot of familiar characters from the Rocky franchise that those diehard fans are going to pick up on,” Jordan says with a smile as he references the film’s subtle touches. “Little breadcrumbs, little easter eggs, a couple homages that you’ll say ‘Oh, wow, that’s pretty cool.'”

SOAKING UP THE ROCKY STORY

Speaking of the Rocky movies, Van Vliet asks Jordan if he’d seen the series before getting involved in Creed. “I did; I didn’t even watch them in order, cause obviously I’m not plus-40, I didn’t get the opportunity to watch the first one, but I fell in love with them over time, and I had to binge watch them before filming just to soak up … the essence of what Rocky was.”

The new character of Adonis Creed, who was developed by the film’s writer/director Ryan Coogler, is loosely based on aspects of two real life fighters – 32 year old current WBO welterweight champion Timothy Bradley and southpaw boxer “Sweet Pea” Pernell Whitaker, who won world titles in four different weight divisions during his career in the 1980’s. “We molded this fighter [Adonis] into something different, but then you see little moments and flashes of his dad [Apollo Creed] which is kinda cool, too,” Jordan says.

As for the filming of the movie’s boxing sequences with Jordan and real-life British fighter Tony Bellew who plays the bad guy, Jordan says that Sylvester Stallone “knows movie fighting better than anybody,” going on to describe how Stallone coached him for the fight scenes, demonstrating that the boxing moves need to be over-exaggerated to make an impact on the big screen.

Perhaps the most interesting question of all: Who won the Rocky vs. Apollo fight at the end of Rocky III? “I can’t tell you,” Jordan laughs.