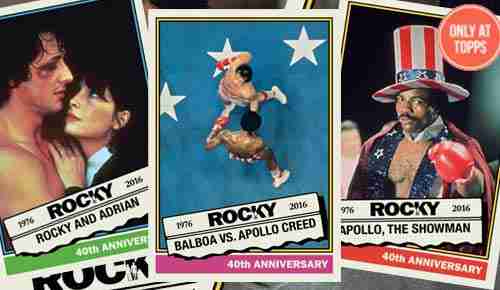 Topps.com has just revealed its special 10-card National exclusive set commemorating the 40th anniversary of Rocky. This limited set of trading cards is only available on Topps.com (click here to purchase) and includes iconic scenes from the first movie. The set is currently priced at $24.99 and the cards are printed on vintage trading card stock.

Though the set is meant to commemorate the original Rocky, which premiered 40 years ago back in 1976, at least one image from Rocky II (1979) seems to have made it into the set.

Topps began its relationship with the Rocky franchise 37 years ago with its terrific set of Rocky II trading cards and stickers, followed by a set released in conjunction with the wildly popular Rocky IV in 1985. Both sets are considered collector’s items among Rocky fans today.

Topps indicates that more new Rocky merchandise will be hitting their website soon.