Sylvester Stallone: “We’re never too old to change. It’s all in the mind.” 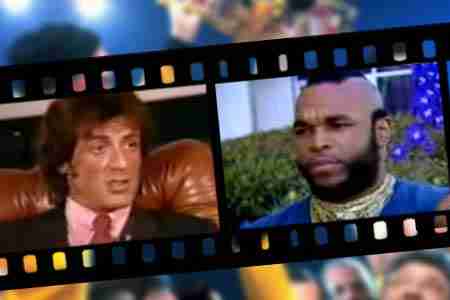 Sly on Rocky III: “I like it the best of the three.”

This 1982 video interview with Sylvester Stallone discusses his newest release, Rocky III, and his feelings about the evolution of his pet character, Rocky Balboa.

“Rocky III is a whole different film. It becomes a star trip that backfires. And I went through the same thing,” Stallone says of his movie career in the early 1980’s. “I just put my problems in [Rocky’s] mouth, and it seems to work.”

Stallone describes the plotline of the third installment and Rocky’s new trainer, Apollo Creed, the former champion, who begins to mold Rocky into an entirely new style. “I guess you might say it parallels the adage ‘You can’t train an old dog new tricks’. Which is wrong,” Stallone says.

Mr. T: “I wanted to show my mother that her work wasn’t in vain.”

The Stallone interview is followed by a one-on-one with Mr. T, who describes his struggles growing up among eleven siblings raised by a single mother in the projects.

Mr. T won the role of Rocky’s nemesis Clubber Lang while appearing on the contest The Games People Play, competing with other macho guys for the title of America’s Toughest Bouncer. Mr. T threw a stuntman further than any of the other bouncers, and caught the eye of producers. But his win wasn’t just fate.

“I think everything that I have is a blessing from God,” Mr. T says. “I believe in God. I didn’t win that contest because I was tough or mean. I believe God was with me, and the cause I represented was far greater than the other guy’s cause.”

While other contestants dreamt about the cars they’d buy with the winnings, Mr. T had higher ideas. “When I win,” he said, “I’m gonna give this money to my church to feed the less fortunate people in this community. .. I couldn’t lose. Cain’t nobody beat me, because I am right. And right is might.”