Sylvester Stallone on “Creed”: “Rocky is the one thing I’ve done right” 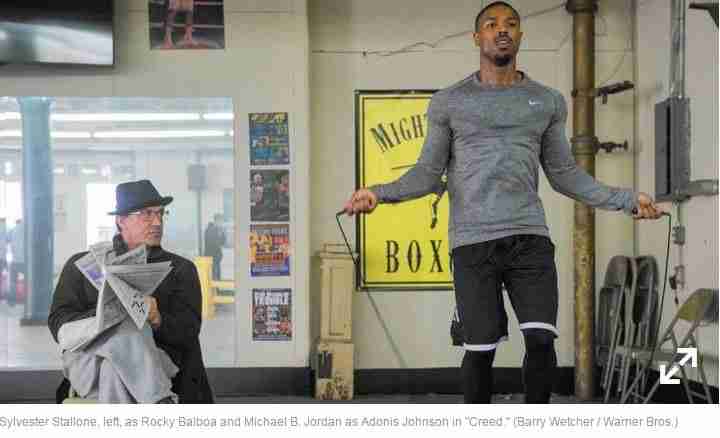 At 69, Stallone and Rocky have both come full circle. “I’m now the same age Burgess Meredith was in ‘Rocky’ — isn’t that weird?” Sylvester Stallone says in the interview. “I’m the guy who’s knocking on the door going, ‘Hey, kid.’ It’s an unbelievable feeling. I’m very proud of it.”

Stallone’s dramatic performance in the film has got fans and critics buzzing about a possible Oscar nod for his role as an aging Rocky Balboa now battling cancer and coming to depend upon the growing relationship with the young son of his former rival. The film’s writer / director Ryan Coogler agrees that Sly turned in an “absolutely beautiful performance” in Creed.

“Can you imagine? That would be really funny, wouldn’t it?” Stallone says of the irony of a potential Academy Award nomination. Back in 1977, Stallone garnered both a Best Actor nomination as well as one for Best Screenplay. Overall, the original Rocky – which was created by Stallone – was honored with a total of ten Oscar nominations. It went on to win three at that year’s ceremony: the coveted Best Picture, Best Directing and Best Film Editing.

The piece describes the reluctance with which Coogler’s story idea was met. “I was dead set against it,” Sly says of the Creed concept. “I just didn’t ever see taking this character into this realm. Finally my agent said, ‘For a guy who played Rocky, you’re kind of a chicken.'” (Click here for more on the making of Creed.)

“They’re running for the Rocky in them.”

In a moving conclusion, writer Josh Rottenburg explains the fact that Rocky Balboa truly belongs to his fans around the world who have been so inspired by this heroic character, emulating him in many different ways, including traveling from all around the globe to visit Rocky’s stomping ground at the steps of the Philadelphia Museum of Art.

“How many people run up those steps?” Stallone said. “It’s incredible. Women who are eight months pregnant. People from different cultures. Intellectuals who have nothing in common with Rocky. They’re not running for Sylvester Stallone — I get that. They’re running for the Rocky in them.”