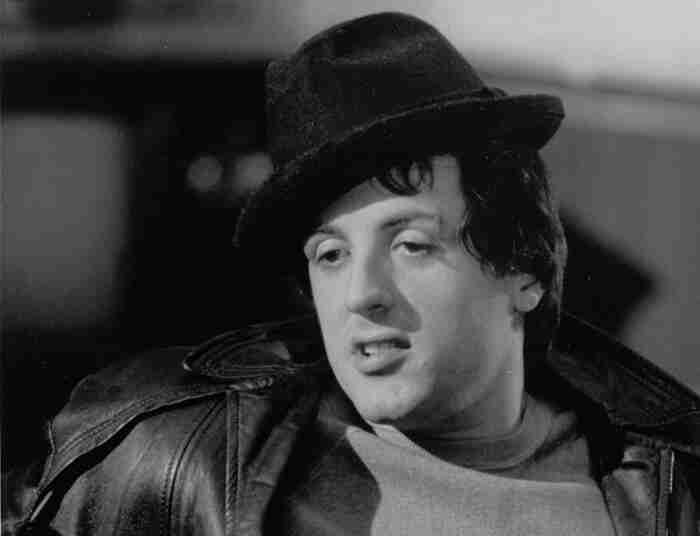 Sylvester Stallone sits on a hotel sofa with his feet up on the coffee table. He wears expensive blue jeans, the kind you buy in Beverly Hills. His muscles bulge beneath a T-shirt that says, simply and inexplicably, “Valentine.”

He has a tough, sensual face, a mane of black hair and the best hooded eyes since Robert Mitchum. Two years ago, he observes, his acting career was “intellectually, emotionally and financially defunct.” Now he talks about how it’s going to feel to be a star.

He’s a star because of Rocky, the screenplay he peddled to Hollywood studios while living in a one-room apartment on next to nothing a week.

He was offered big money if he’d sell the story and let someone else star in it – but, no, he thought he ought to be the star himself. He held out long enough and United Artists finally let him do it, and the movie’s one of the year’s surprise hits.

Rocky is about a mob enforcer and punk prizefighter from Philadelphia who gets a lucky crack at the heavyweight title and knows it may be his one shot at amounting to something in life. The story could be Stallone’s.

After years of getting nowhere as an actor in New York, he went to Hollywood and got nowhere there. He had roles in Capone and Death Race 2000, and a nice scene in Lords of Flatbush where he was buying his girl a wedding ring. But things were not exactly snowballing for him when Rocky came through.

“When we finally knew that Rocky was going to be made and I was going to play Rocky, I knew this wasn’t only my shot, this was my life. Everything had to be perfect. I was hard on the crew when we were shooting – they thought I was a miserable bastard – but I had to give the movie my best shot. After the movie was over, if it was a flop, they could go back to Baretta. For me, it would be a one-way ticket back to Palookaville.”

The movie’s climax is the championship fight itself, and it goes 15 bloody rounds and contains some of the most brutal violence ever put into a boxing film.

It leaves audiences drained. And yet, I said, there’s a curious thing: Women often say they don’t like violence in movies, and yet they like Rocky. Why does the movie appeal to them?

“We shot that scene all day, and she was beautiful. So shy, so pale, so trembling. Then it turns out she had the flu. Christ, Talia, I said, no wonder you looked so great! So then she gets better and we all get sick, but it’s a great scene.”

“And another thing, I don’t believe in agonizing over a story. I don’t think any screenplay could take me more than five weeks to write. So some of the scenes stink? So, OK, we’ll fix them the second time around. It’s the emotional structure that matters anyway. I’m a very fast writer.

“One reason for that is I’m a separatist, which means I like to be separate a lot. Socializing diminishes my powers of concentration. There’s nothing left for the page. I don’t think I’ve been in two bars in my life. You wanna know what my idea of a good time is? Having an intellectual conversation with a friend while flicking gravel at a stop sign.”