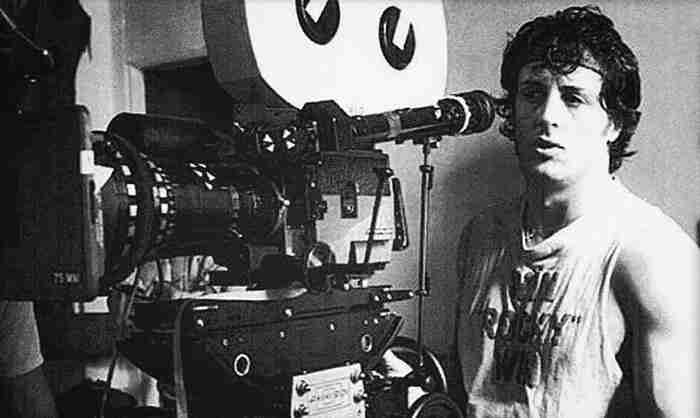 “There is this one question which when I hear it makes me very mad,” said Sylvester Stallone. ‘They all ask me. ‘Will Rocky II save your career?’ Is this my comeback, they wanna know? Will it pull my career out of the toilet? I didn’t think I was doin’ so bad. I’ve never made a film that lost money. If Rocky II was a comeback, I coulda made it a lot more commercial. Like, Rocky coulda been an astronaut.”

He stretched in his hotel suite, one leg over the arm of his chair, and sighed.

This was during a quiet hour on the afternoon of the day when Rocky II was going to have the visit to the ballpark. Lunch had been a press conference.

“What it was . . . after Rocky was such an enormous success, anything was gonna be an anticlimax. I made Paradise Alley. Not as much, but it’s into profit.

“You know what I think happened? After Rocky I was almost set up in the eyes of the media to make a flop. The last two years have been pretty tough, public image wise. I said some things that did not exactly endear me. My ego got blown out of proportion.

“I reran, just out of curiosity, some cassettes of talk shows I was on. I realized painfully that I was giving Sylvester Stallone and they wanted Rocky. They’d ask me questions which I, as an actor, knew nothing about, and I was so enchanted by the sound of my own chatter that I’d spout off my opinions. One day I was doing that on the Dinah Show. And after the show was over, this innocuous-looking gentleman walked up to me. His eyes were glistening. He said one thing: ‘Why are you doing this? Then he turned and walked away.”

Stallone is a hero in Philadelphia, Rocky’s home town, which supplied the locations for both Rocky and its sequel.

The night before, he pitched out a ball at the Phillies game and was saluted by a civic official: “You typify the Philadelphia spirit, which is, that you can win without winning.”

A somewhat oblique compliment, but Stallone was taking what he could get. His noon press conference had been a media circus. Typical question: “Do you think an Italian from South Philadelphia can be elected mayor?” Stallone had dropped a couple of bombshells, but nobody seemed to pick up on them. One was his curious statement, “There’s a tremendous disorder in my body right now.”

I asked him what he’d meant by that.

“Just what I said. I’m real messed up inside. When we were filming Rocky II I took a terrible beating. I let Carl Weathers (who again plays his opponent, Apollo Creed) really pound me. It was the most grueling thing I’ve ever been through. Broken bones, the works. The fight’s four times as long and has eight times as many punches as the first one. A lot of those shots aren’t faked. It’s as hard to learn not to hit someone as to hit them. Right now my health is pretty bad.”

GOING TO THE HOSPITAL

“It’s really bad. I have to go in for extensive testing. They talk to me about enlarged intestines, rearranged insides . . . I’ve lost a lot of weight. Don’t worry; I’ll get it all fixed up.”

But you plan to make a final sequel called Rocky III. Will you go through all that pounding again?

“See, I have this thing, it may sound crazy. When I was 15, I read the Studs Lonigan Trilogy, by James T. Farreli. About this Irish kid in Chicago, I guess he died when he was about 32, he was all screwed up. But I’ve always wanted just one time for the American cinema to round out a character. Each movie should deal with about a year of the character’s life.”

So in Rocky III do Rocky and Apollo have a rematch?

“No. I’ve got more up my sleeve than that. I’ll tell you what’s gonna happen. Apollo retires. Mickey, Rocky’s manager, has a stroke. Rocky wants to retire, but there’s this street-tough challenger and Rocky decides one more fight, even though he’s half blind, and this’ll be his last fight one way or the other. He goes to Apollo Creed and asks him to be his trainer. And Apollo teaches him to fight the way he does.”

Stallone smiled. “It’s interesting, their relationship, because Apollo Creed is a Rhodes Scholar compared to Rocky Balboa. Apollo teaches him things like how to handle his money. Rocky teaches Apollo stuff about being street-smart. Can you imagine, for example, Rocky Balboa in Europe? But that’s where I’m gonna take him.”

For his final fight?

“His last bout will be in the Roman Colosseum, carried worldwide by satellite,” Stallone said, and his voice picked up enthusiasm.

“Can you see it? Rocky in the Colosseum? The last gladiator? And, for training, running up the Spanish Steps? And, Rock’s deeply religious, can you imagine him inside St. Peter’s? I’m seriously gonna try to work in an audience with the Pope into the film. I dunno. Maybe with this Pope, he’ll go for it. If he don’t, we get another Pope.”

And then that’ll be it for the Rocky pictures.

“Yeah, I want to turn my attention to movies about love relationships. Exploring the female psyche – there ought to be some interesting discoveries there. Love stories. If you do it right, people want to hear romantic dialogue. Like Rocky says, ‘If you wouldn’t be here, I couldn’t be here.’ It looks dangerously corny on the printed page. But if it works in a movie, people love it. People stories. I’m not at all interested in, you know, these Nine Men Against the World movies. But there’ll never be a Rocky IV. You gotta call a halt.”

The door to Stallone’s suite kept opening and closing, and the room began gradually filling with people: With six publicists from United Artists, with four bodyguards, with two city aides. It was time for the big move. Stallone was going to try to emerge from the hotel in one piece and successfully make his way across town to the Academy of Natural Sciences for the great turtle-presentation ceremony.

“It’s like this,” he said. “I could go on playin’ Rocky forever, but it’s like even the Bowery Boys got a little embarrassing when they were 50 or 60. They shoulda been the Bowery Seniors.”

Downstairs, in front of the Barclay Hotel, the crowd had been waiting for hours. They were still chanting “Rocky!” A police captain supervised his men on the barricades. The limousines waited with their motors idling.

Stallone emerged from the hotel to tumultuous cheers, raised his hands over his head in victory, ducked into the limo and was gone with an escort of police cars and kids on bicycles.

At the Academy of Natural Sciences, all was ready. Stallone was sneaked in a back door. The head of the Academy, Dr. Thomas Peter Bennett, gave a backstage briefing: “First, my remarks. Then Mr. Stallone enters to the Rocky Theme. Then the presentation.”

Out in front, the auditorium was jammed with Rocky fans, most of them female teenagers. A table next to the podium held a glass bowl covered with a brown cloth.

Dr. Bennett appeared, cleared his throat, smiled at the ovation, and reminded the audience of “Mr. Stallone’s tender scene with his pet turtles and other animals.’

Stallone was on the stage, and the audience went wild.

Stallone grinned, signaled for silence, spoke: “Uh . . . these turtles, they’re named Cuff and Link, they may not speak dialogue too good but they crawl real nice. They’re two amphibians I picked up on a roadside in New Jersey, and now they’re immortalized.”

He pulled the cloth off the bowl, and there they were, Cuff and Link.

More cheers. “Hear that, Cuff and Link?” he said. “Sounds good, huh? Even a turtle should have his place in the sun.”