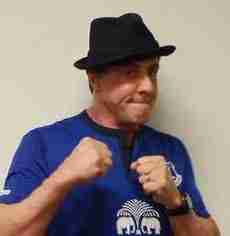 Last night in England, Sylvester Stallone appeared on the big screens before the crowd in Goodison Park to deliver a special half-time message to the lucky attendees.

“We want this to be a glorious moment,” he said as he to ask for the crowd’s participation in recording cheers for the film “Creed”. “We’d like to see your faces on the screen, so please help us out, we’d appreciate it. And most of all – Go Everton!”

Stallone will be appearing in Sheffield, England in a matter of days for his third live personal appearance to discuss his career interview-style with fans on stage. He’s also begun shooting for “Creed” and will be appearing as Rocky Balboa alongside Liverpool boxer Tony Bellew. “I play the pound-for-pound champion of the world and I end up facing Adonis Creed. Rocky Balboa gets involved when he agrees to train Adonis. But, if Adonis wants to be the champion, he has to go through me,” says Bellew of his role as Creed’s opponent.