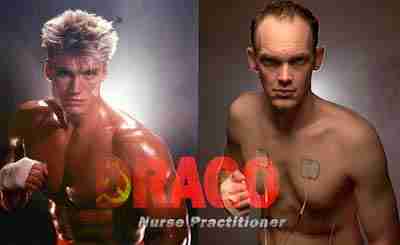 Actor Lucas Van Engen (www.LucasVanEngen.com) sent in this parody trailer he produced and starred in titled “Drago: The Movie”, an amusing take on the trailer for the upcoming “Creed” movie, but this time, putting the son of Ivan Drago in the limelight.

The well-produced video trailer, which cost $3,500 to shoot, was shot by cinematographer Kevin Schaefer and directed by Joshua Durham, whose film “Shadowboxing” (shadowboxingfilm.com) just premiered at the New York Film Festival.

Durham, a boxer in real life, also got some “reel” boxing experience working on a Golden Gloves documentary in addition to “Shadowboxing”.

“I scream a lot in this video,” the actor says of his role as the scrawny son of Drago.

“All of those screams and the exercises themselves took place in a non-stop 12 hour shoot day. You’ll also notice I’m cinematically sweaty. That’s because the make-up girl was dousing me with glycerin and water for 12 hours straight. Well, it turns out I have a mild glycerin allergy. Two days later I showed up to a voice-over job with blown-out vocal chords, a puffy face and sore muscles. I must have looked like I had a serious hangover. I pulled off the job, though.”