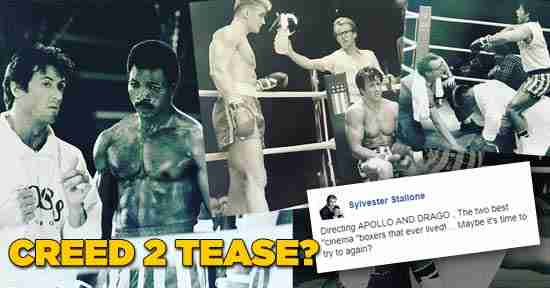 Sylvester Stallone has been releasing rare, never-before-seen pictures shot during the making of Rocky IV this week. His latest shows a battered Carl Weathers in the ring, facing Dolph Lundgren as Stallone directs Apollo’s death scene.

“Directing APOLLO AND DRAGO, The two best ‘cinema’ boxers that ever lived!” Stallone captions the photo. “Maybe it’s time to try to again?”

Busy with his current projects Escape Plan 2: Hades and the recently released Guardians of the Galaxy Vol. 2, Sly hasn’t touched the topic of another Rocky sequel in some time, so his comment is particularly intriguing.

Meanwhile, Adonis Creed himself, actor Michael B. Jordan is re-teaming with Creed’s director Ryan Coogler on yet another film project, “Wrong Answer.” The duo has just completed work on the upcoming “Black Panther” movie, set to be released in 2018.

How De-Aging Sylvester Stallone Could Take Rocky Back in Time

With recent advances in movie magic, the possibility of bringing classic Rocky characters back to the screen as they appeared in their youth is tantalizingly possible.

Sylvester Stallone’s “Tango and Cash” co-star Kurt Russell is the latest example of the wonders of CGI in Guardians of the Galaxy Vol. 2, where 66-year-old Russell’s character is seen as a young man.

Other actors recently de-aged on screen include Arnold Schwarzenegger in Terminator Genisys (read this great article on how Arnold digitally became the 1984 Terminator again) Michael Douglas in Ant-Man, Jeff Bridges in Tron, Robert Downey Jr. in Captain America: Civil War, and most recently Johnny Depp as a youthful Captain Jack Sparrow in Disney’s Pirates of the Caribbean: Dead Men Tell No Tales. 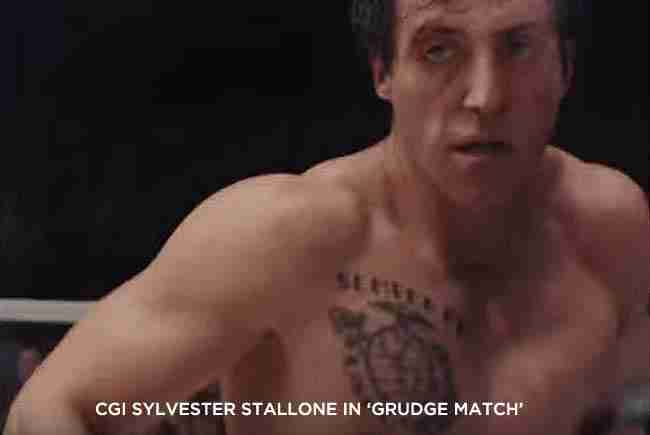 “[The effect] been done successfully,” says Oscar-winning animation supervisor Hal Hickel of Industrial Light & Magic. “Filmmakers realize it’s an option in telling a story, or maybe it has opened up an option that they need.”

Sylvester Stallone himself underwent the CGI process and didn’t come out for the better, along with co-star Robert DeNiro for their 2013 boxing flop Grudge Match.

With some talk of shooting a sequel to 2015’s Rocky-spinoff movie Creed, including star Michael B. Jordan saying “it’s gonna happen”, producer Irwin Winkler saying much the same, the acceptance of de-aging actors is becoming more prevalent. This is especially interesting given that one of Stallone’s early ideas for Creed 2 would involve a Godfather Part II type of storyline which would fluidly move between past and present – giving an exciting opportunity to see Rocky Balboa, Apollo Creed, and other original Rocky franchise characters as they appeared in their youth.

The Secrets Behind the VFX

Kurt Russell’s amazing transformation back to the face of his 1980’s films drew gasps from early audiences screening Guardians. The labor-intensive process began with the effects team studying vintage photos and films of Russell to determine the look his Guardians character would have had 30+ years ago.

Then, a young actor with a similar body type and facial features was cast to stand in for Russell. The two actors were dressed in the same costume, and extensive makeup was applied to Russell to give him a youthful appearance. Next, the men were fitted with digital tracking markers on their faces for computer analyzation, and each actor performed the same scene as identically as possible to match each other.

Back in the wizard’s lab, the VFX techs combined the footage with limited CG effects, adjusting the faces of the actors frame by frame, essentially cutting and pasting portions of the younger actor’s facial details and merging them with Kurt Russell’s current face, creating an extremely convincing version of Russell as he appeared in his thirties.

“The technology is getting better, but it’s really the artists, that’s the key,” says VFX supervisor Christopher Townsend, “It was a huge amount of work—months and months of artists working at computers.”