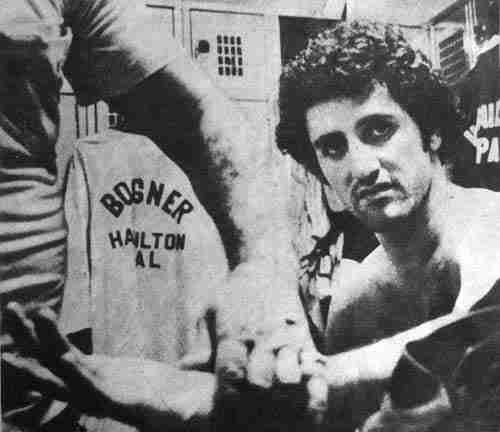 Frank Stallone lived out his brother’s movie, Rocky, for real when he trained for a professional match – and won.

“I was always a bug on boxing,” he explained. “When I was 10 years old, I went through a big Jack Dempsey phase, complete to shaving the sides of my head to look like Dempsey.

“Then when Sly first started work on Rocky, I used to fool around with him in the gym. When the fight scenes were finished he gave me all the equipment. Suddenly I was a latent boxer with all this rich kid’s gear.”

At 27 Frank, who recently recorded an album titled “Valentine”, spent two months living the life of the movie’s anti-hero Rocky while training for his first professional fight.

“Everybody thought I was crazy,” he said. “My brother called me every day and tried to make me forget about the whole thing, but there was no way that I would.”

His training paid off. Jabbing and hooking, he devastated his 160 lb. opponent in less than two minutes of the first round. Then, despite the back-slapping and admiration, he announced that he was hanging up his gloves.

“It’s out of my system,” he said. “To understand why, you’d have to get into the ring. It was a very frightening experience. Once you’re out there you forget everything that you’ve been taught in the gym. I kept thinking I wish the bell would ring so I could go to my corner, clear my head and remember what I was supposed to be doing.”

But Frank insisted that he knew there was no way he was going to lose.

Now Frank is not so sure about his future. He is still interested in singing and perhaps an occasional movie part.

“My brother has written some parts for me in his next two movies, so I hope something will come of that,” he said.