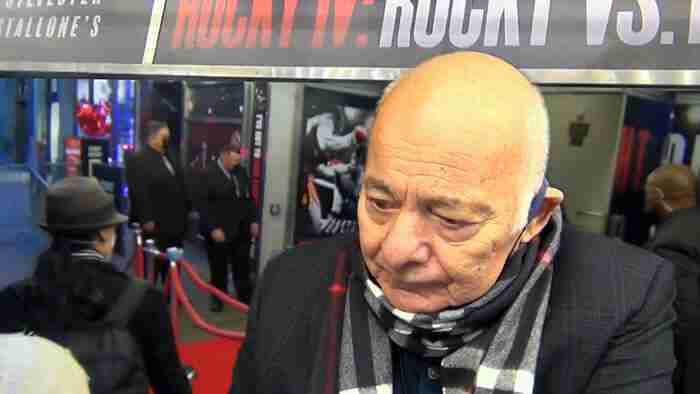 The one-night-only Philadelphia premiere of Sylvester Stallone’s directors recut of Rocky IV, “Rocky vs Drago” was held on November 11. An invitation-only event, a limited number of people were in attendance for the screening, but Rocky fans still waited outside hoping to get a glimpse of Sly.

A little before 5pm, a red carpet was rolled out in Center City Philadelphia for the arrival of special guests Sylvester Stallone and Burt Young. The theatre was plastered with Rocky vs Drago posters and advertising for the special event.

Our pal, Total Rocky contributor Tony DeGennaro AKA Captain Catholic managed to capture the excitement of the red carpet and even got to meet Burt Young at the event.

Although Sly Stallone appeared at the exclusive Q&A with TCM’s Ben Mankiewicz which was aired live prior to the nationwide cinema screenings, he then ducked out the back of the theater without stopping, and with a wave to the crowd, slid into his waiting car, much to the dismay of those waiting outside.

Earlier in the day, Burt Young stopped at the Rocky Steps to pose with fans next to the Rocky statue. Lots of fans shouted “We love you, Paulie!”, and though at 81, Burt seems to be having a bit of a tough time getting around, he was still genuinely pleased at the reaction from his fans.

“I got a picture with him, he put his arm around me, I shook his hand and then, on his way out, I said, ‘We love you Paulie! In fact, my KIDS love you!’, Tony recalls.