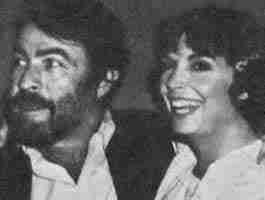 By Rod Gibson | The National Enquirer

The two slipped off to Las Vegas where, on August 23, a civil ceremony made them husband and wife. No family members or friends were present – and even Talia’s publicist didn’t know about the wedding until it was all over.

“We never made an announcement about the birth or the marriage simply because we didn’t think it was big news for anybody else,” Talia, 34, explained to The Enquirer.

Another reason they wed in secrecy, her new husband added with a laugh, was that he and Talia have so many relatives and friends that “we’d have had to rent out the Los Angeles Coliseum” to invite them all.

“In order not to offend anyone – you know how people get offended if they’re not invited – we decided we would slip away and do it with just the two of us,” explained Schwartzman, 43, an executive with Lorimar Productions.

“It was a very simple and short ceremony. We had the child in June [future actor Jason Schwartzman, born June 26, 1980] and held off getting married because we had to wait for my divorce to become final on August 11.

“We’re very happy and very much in love. Everybody should have what we have. It’s just a terrific relationship. We’re very lucky we found each other.”

Talia met Schwartzman in June of 1979 following her divorce from composer David Shire. She and Schwartzman, who was already separated from his wife, began living together at his home shortly afterward.

“There wasn’t any hostility involved between the former spouses,” the executive disclosed. “When we brought the baby home from the hospital, David Shire was one of the first people to come by and see him.”

He added that the wedding wasn’t a spur-of-the-moment thing. “We had planned to get married all the time.”