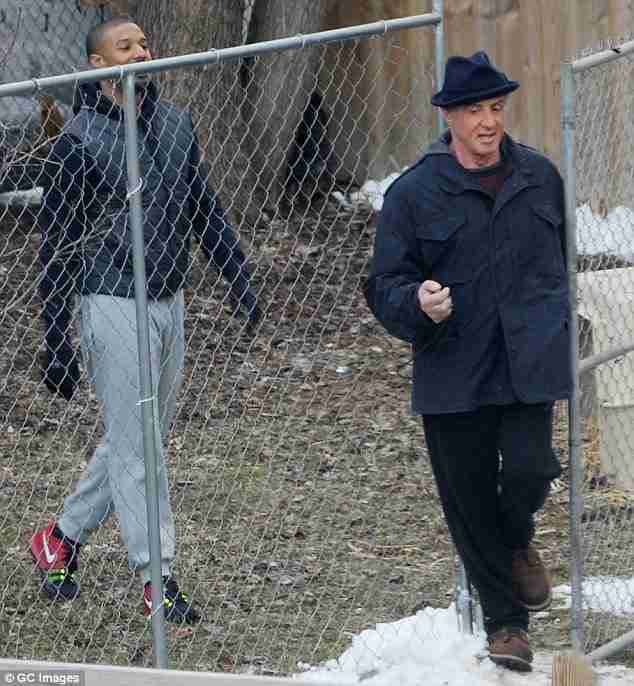 We need speed, speed’s what we need – greasy fast speed!

An icy March 9, 2015 found Sylvester Stallone and Michael B. Jordan on location in Philadelphia to shoot a modern day remake of one of the most famous and amusing moments in the Rocky movies – The Chicken Chase.

Stallone and Jordan were spotted filming a new scene of Creed – or Rocky 7 as fans are beginning to call it – outdoors in a caged area filled with live chickens, an homage to Mickey Goldmill’s method of training Rocky back in Rocky II.

“What do I got to chase a chicken for?,” Rocky asked Mickey about the comical practice to which Mickey responds, “Chicken chasing is how we used to do it in the old days.”

Chasing chickens was a common practice for training boxers to develop speed in the 19th century, though it isn’t something you see in the empty lots behind boxing gyms these days – maybe only Kentucky Fried idiots do it.

Fans of Xbox and Playstation’s “Rocky Legends” video game may remember the career game mode for the Rocky Balboa character included a training option to develop speed … the Chicken Chase.

Stallone’s Rocky Balboa character is looking slightly healthier than we’ve seen him on the set of Creed lately, although his hair is shown to be graying. He’s decked out in his familiar costume from Rocky Balboa and is seen carrying a stopwatch to time Adonis’ speed as he chases after the chickens in the pen.

Click here to see all the photos and read more >

Last week, Sylvester Stallone spent time on the Creed set in Aston, Pennsylvania at Sun Center Studios with Michael B. Jordan and real-life UK boxer Tony Bellew, who is taking up the bad guy position as “Pretty” Ricky Porter in Adonis’ match in the movie.

Scenes in the boxing ring were filmed which showed the Adonis character wearing a modern day version of Apollo Creed’s famous stars and stripes boxing trunks. As fans well remember, Apollo gifted the boxing shorts to Rocky for his battle with Clubber Lang in Rocky 3, and Rocky Balboa later passed them down to his protege Tommy “The Machine” Gunn in Rocky 5.

A recent report from ringside at the Adonis vs. Pretty Porter fight filming claimed that boxer Bellew got into a scuffle with the actor playing his boxing coach and that Sylvester Stallone stepped into the midst to break up the brawl.