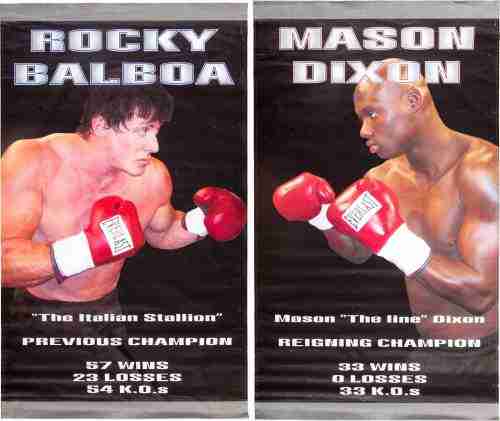 The Italian Stallion vs. Mason “The Line” Dixon

Two screen-used props from 2006’s Rocky Balboa are currently up for auction on eBay, with a hefty opening bid of $18,700 for the pair. Click here to view the auction.

The fight posters, which measure an impressive 96″ x 56″ (that’s 8′ feet tall!) were sold by Sylvester Stallone in 2015 at his massive auction of Rocky and Rambo memorabilia and have hit the auction block again, this time being sold by a private collector.

The huge canvas banners feature images of Sylvester Stallone and boxer Antonio Tarver in character as Rocky and Mason Dixon and were used during the final fight scenes at Mandalay Bay in Las Vegas. “Previous Champion” Balboa is listed as having a fight record of 57 wins, 23 losses, and 54 KO’s. Dixon’s “Reigning Champion” banner lists his boxing career highlights as 33 wins, 0 losses, 33 KO’s. Both fighters are shown wearing red Everlast boxing gloves, though the actual Balboa / Dixon match had them each wearing black Everlast. Read more about Rocky’s boxing glove choices here.

The prop posters come with a letter of authenticity signed by Sylvester Stallone and presented at the 2015 Heritage Auction in Los Angeles.

Sylvester Stallone Knocked Out on "Rocky Balboa" Set
Little Marie & Steps' House
Stallone to Get Back at Critics with 'Rocky VI'
Irish Pub
Sylvester Stallone: "We're never too old to change. It's all in the mind." →