Pre-Order Your Copy of “Creed” on DVD / Blu-Ray 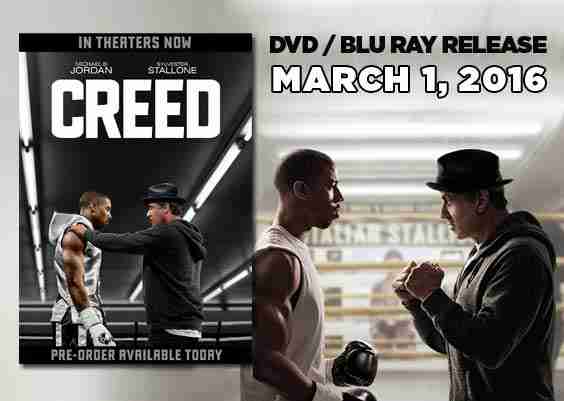 Exciting news as the DVD and Blu-Ray release dates for Ryan Coogler’s Creed have now been revealed. MGM announces that Creed will be released on March 1, 2016 on DVD for $28.98 and Blu-Ray Combo Pack for $35.99 which includes the film in high definition on Blu-ray disc, a DVD, and a digital version of the movie in Digital HD with UltraViolet.

Thankfully, the discs contain a few featurettes on the making of the film, as well as the much coveted deleted scenes from Creed. Pre-orders are being taken at video retailers as of today. Click here to pre-order your copy at Amazon and get it shipped as soon as the movie is available!

Creed will be available digitally on Video On Demand services from cable and satellite providers, and on select gaming consoles March 1.

You can own the movie even earlier than that – on February 16 – when MGM releases the film on Digital HD where it will be available to own for streaming and download to watch anywhere in high definition and standard definition on devices.

Creed is still playing in cinemas across the United States and the United Kingdom, and hasn’t even opened yet in some parts of the world including Argentina, Bolivia, Panama, Uruguay, Sweden, Chile, and Hong Kong where the movie debuts dead last on February 25.