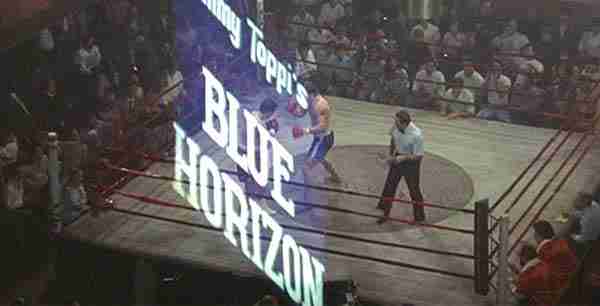 In it’s prime, The Blue Horizon in Philadelphia hosted 1,500 fight fans poised to watch some of the country’s most promising boxers.

Located on North Broad Street in Philadelphia, Blue Horizon was featured as a filming location in Rocky V‘s first fight montage as Rocky and Tommy Gunn climb their way to the top.

An exterior shot of the venue as well as it’s signage are featured in the “Go For It” music montage, and quick shots of the famed interior can be seen behind Tommy Morrison as he throws his deadly punches.

The venue closed in 2010 and has sat abandoned for the last seven years, at risk of demolition.

In the spring of 2016, an auction was held which sold off hundreds of boxing related items from Blue Horizon in 48 lots including original fight posters, wooden bleacher seats, the bell and a shower door, autographed by Philadelphia’s own Smokin’ Joe Frazier, who appeared in a cameo in the original Rocky back in 1976.

“That was a door that led into the shower,” said the auction house co-owner of the old door. “What does he say? ‘Great place. The Blue. Joe Frazier,’ and it’s dated 2003.”

The buildings which house the arena were constructed as housing in 1865, and by the 1960’s, subsequent owners transformed it by adding a hall and auditorium, perfect as an elegant boxing venue.

The Blue Horizon is expected to become a garage soon.